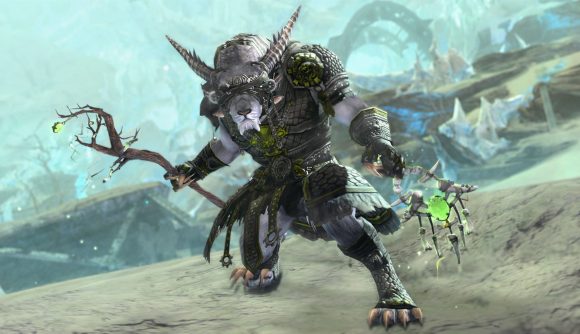 Jormag Rising, Chapter Four of Guild Wars 2‘s Icebrood Saga, takes us further into the heart of Drizzlewood Coast to tackle a new map-wide meta event, stage in the ongoing story, and some big bosses. Following the events of Episode Three, No Quarter, players have to deal with the fallout of Smodur’s murder of Cinder Steeltemper in cold blood, and subsequent reveal of a new foe by the now-fled Ryland Steelcatcher: the Frost Legion, charr infused with the dragon’s icy magic. Plus, the chapter ushers in a brand-new story to delve into, as well as shiny rewards, masteries, and other goodies to scoop up.

As developer ArenaNet shared with PCGamesN in a demo of the new chapter, Jormag Rising plunges players into the northern half of the Drizzlewood Coast map. That ice wall blocking access to it from the existing southern half has mysteriously receded, revealing a network of caves lurking right underneath the enemy lines.

Your job is to sneak through a beach patrolled by enemy charr forces, take out their weapons, set up camp, and then tackle the United Legions’ ultimate targets: a monstrous war machine, the Frost Citadel, and an icy beast that lies in wait.

The map-wide meta event kicks off with a bid to capture Dominion tribunes’ attention, starting with the Iron tribune. There are five tribunes in total, each with a few distinct tricks up their sleeves, and once you’ve pushed past the first, the map opens up, and you can push forward to take control of the map’s different sectors. This process is a little less linear than in Episode Three, but still hinges on killing enemies and completing events within each region – and all four sectors can be taken in one fell swoop, if desired. 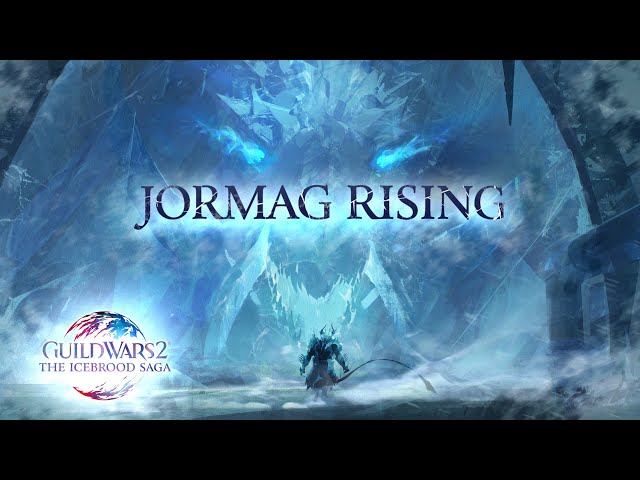 One example includes storming a Dominion camp to take out waves of enemy charr foes and rescue POWs captured by them. Sector tribunes get lured out to confront you once a bar measuring event and enemy defeat completion fills up. Once a tribune has been alerted to your presence, you’ll face a tricky boss fight that you’ll likely want to tackle with a band of allies at your side – and, if you’re lucky, you’ll scoop a tribune’s weapon drop, too.

Further into the meta, you’ll mount an assault on the Frost Citadel, which takes you out of the lush forests of Drizzlewood Coast and into its chilly, ice-ridden northern wastes, where you’ll face plenty of foes with equally chilly dispositions. You’ll need to stay clear of frost-filled welts in the cracked ground, too – you’ll get more than a touch of frostbite if you fall in. 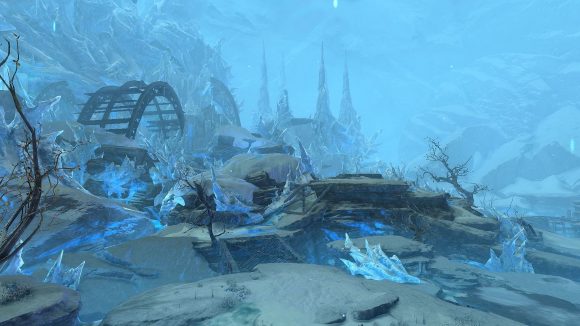 As you reach the event’s zenith, you’ll get the chance to take down a colossal, tank-like war machine: Ruinbringer. You can hop on top of the machine as it moves around and batter away at it all you like, but a fun way to tackle it is by ‘borrowing’ some enemy charr cars knocking about and using their harpoons to strip the tank of its plating, piece by piece.

Lastly, after smashing up some blood processors harvesting the elder dragon’s life force, you encounter a monstrous foe: a Claw of Jormag – that is, a lieutenant of the Elder Dragon – who is not happy to see you. The dragon dishes out strafing runs, beam attacks, and portals that let Frost Legion foes flood into the zone, so you have to get some cannons set up, pronto, to get the Claw under control. It’s an epic fight, and it goes through various tricky stages. At one point the dragon blasts your cannons with ice crystals, so at the event’s end, you have to storm the raging beast and wear down its remaining health with DPS attacks. Phew. 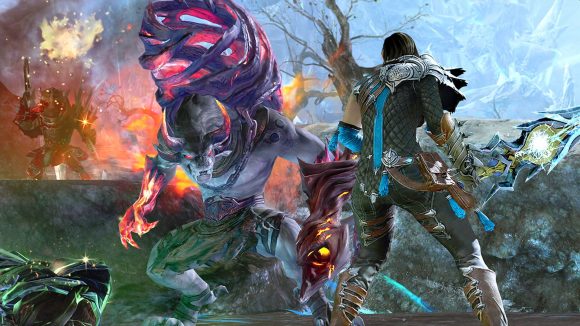 Aside from the meta event, Episode Four also ushers in new rewards, such as a Dominion Tribune weapon set, which comprises several weapons themed after the various charr Legions – Flame, Frost, Iron, Ash, and Blood – such as a pistol, torch, and greatsword. There’s also an upgraded Stormcaller set with snow-like effects, letting you craft a new tier, an empowered Boneskinner set, and some Frost Legion infusion gear, which comes with some nifty blue, snowy effects. Oh, and there’s another infusion to be found, too – but you have to to explore to find it.

In addition to a new emote, an expanded version of the previous episode’s shiver emote, there are some new masteries to discover from the waystation. For example, one unlocks an Iron Legion ‘medi-zooka’, which is healing-focused. Essentially, you shoot yourself up into the air, launch a parachute, and then rain down buffs and healing on your allies from the air. That’ll be handy when your band is taking on a big boss.

New-style reward tracks are also continuing, tied to specific Legions. Episode Four brings two more of these – Frost Legion and Essence mastery – each with their own sets of rewards, and tying into the events of the story.

Guild Wars 2: The Icebrood Saga Episode Four – Jormag Rising is now live, according to ArenaNet, so go get stuck in.