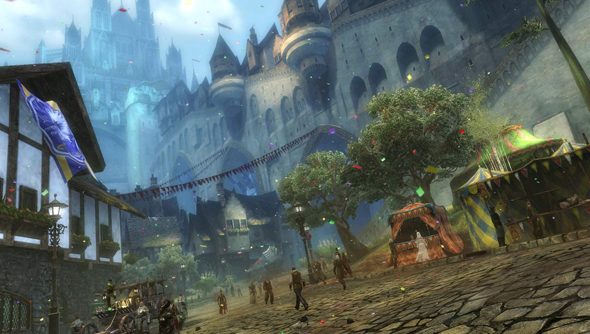 As MMOs go, ArenaNet’s is far from the least accessible to newcomers. In Guild Wars 2, a class build isn’t something irrecoverable you’re forced to pick before you’ve even set foot in its world – instead, it’s simply something that happens to you as you swing your new favourite stick at mobs on the outskirts of Divinity’s Reach.

The developers think they can do more, though, and so the game is getting a pre-level one optional tutorial, new hint system and more courtesy of its upcoming Eastern release.

In a mammoth blog post I’d encourage any dedicated Tyrian holidaymaker to delve into on their own time, Guild Wars 2 game director Colin Johanson said that the new features are being added in the wake of the game’s first limited beta test in China.

“To prepare the game for its eastern release, we’re building a new comprehensive ‘level zero’ optional tutorial that teaches the core basics of the game,” he wrote. “We’re also adding new story steps at levels 5 and 10 to help better teach core mechanics as players grow.”

In addition, ArenaNet will be vastly improving the breadcrumb trail of hints left in the opening hours of the game and adding a new level-up messaging system, “all to better teach the game”.

“All of these systems will be added to the game not just in the east, but to help future new players in the west as well,” Johanson confirmed.

How did you find your opening moments in Tyria? Exhilarating? Confusing? Another adjective entirely?