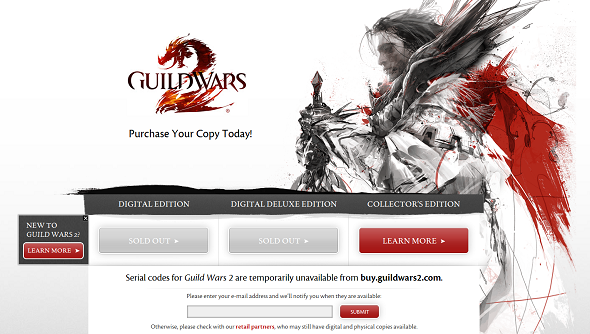 Guild Wars 2 sales have been through the roof: with over 400,000 users playing concurrently during the headstart period. Sales have been so good, in fact, that Arenanet and NCSoft have taken the unusual step of halting them, “to preserve the game experience.”.

The announcement was posted on Facebook in the early hours of the morning.

Over at Techland, Mike O’Brien gave us some insight into the life behind the scenes of the launch.

“We’ve stress-tested every system in the game, but no stress test will get you to the point our servers are at right now with launch, so we’re monitoring every part of the game. There’s the game itself, the guilds, parties and friends lists, the trading post, web services and tons more.”

Mike also touches on the reasoning behind the decision to turn off sales. “My priority — our priority — is ultimately making sure that players have a great experience. We spent five years working on Guild Wars 2, and we’re going to spend years and years supporting it. If we got to a point where sales continued to be off the charts, and it threatened the experience that players are having with the game, then we’d just turn off sales.”

Don’t worry though, you can still purchase Guild Wars 2 at the other retailers. “To clarify what I mean by that, we sell the game on our website and we also sell the game at retail. And we know how many boxes we’ve created, so we know how many copies can possibly sell through retail. If it gets to the point where sales are so high that it would be unwise of us to keep selling on our website because it wouldn’t leave enough slots for all the people who’ve already bought and all the people we know are going to buy, then we’d just turn off sales.”

It’s amazing that Mike is willing to put the players and their experience before sales and profits. A rare quality that ultimately will earn him loads of kudos with the community, and probably more sales. If the Guild Wars 2 overflows are getting you down, check out our ‘how to beat the overflow’.