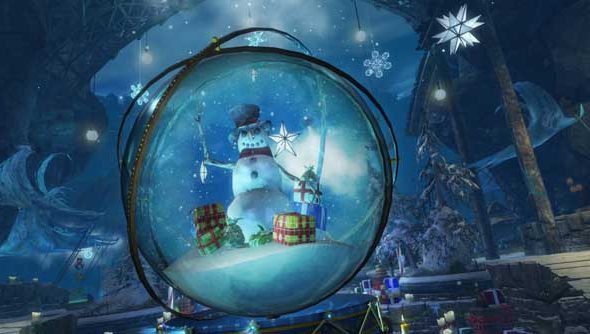 One of the senses in which Guild Wars 2 really is a fitting successor to WoW is in its willingness to bend lore and logic in the name of a good time. Seasonal events have become excuses for elaborate platforming puzzles and server-wide fireworks displays, and Wintersday 2013 is no different.

Don’t ever hand ArenaNet control of the John Lewis Christmas ads, dear reader, supposing you’re ever in a position to do so. They’ve decided to pair a jovial yuletide tune with an overdubbed voiceover straight from Stargate SG1. Unnerving, it is:

Chief among the various events to reveal themselves come Tuesday is the returning Toymaker Tixx’s workshop – found in his ludicrous golem-shaped airship, and home to a host of runaway toys that need rounding up.

The Toypocalypse, similarly, tasks players with defending “noble, gift-bearing” dolyaks and Tixx’s toymaking machine from an onslaught of plastic perps. But I imagine players will be drawn first to the Winter Wonderland – a multi-path, “death-defying” jumping puzzle.

“Leap from snowflake to snowflake, prance up a stack of gifts, and race giant snowballs on your way to the prize!”, suggest ArenaNet.

Elsewhere there’s the Bell Choir’s multiplayer musical challenge, the Toxic Alliance’s Lingering Poison to tackle, and the annual snowball fight. While the latter might sound light-as-cold-water, it’s actually a team-based PvP affair, so expect things to get heated.

The reward for meta-achieving all this will be Tixx’s toybox – which conceals a Mini Ventari, Mini Plush Griffon, Mini Princess Doll, Mini Toy Golem, or Mini Toy Soldier.

Non-festive features in with the update include new healing skills, a raised skill cap for crafting disciplines, and some trait-focused balance tweaks. That’ll help with the newly embiggened Fractals of the Mists dungeons, I expect.

There’ll be a dedicated developer livestream on Twitch, Monday at 12pm PST. D’you think you’ll be tuning in?