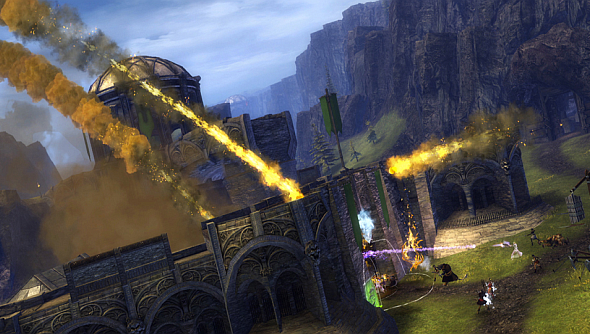 Wintersday for Guild Wars 2 players will mean more than egg-nog and presents. Alongside the festivities, ArenaNet are planning for serious WvW improvements, introducing a new mechanics aimed at keeping its jolly warriors content. They include advanced notification of builds, no more Alt+F4 escapes, gates no longer rebuilding instantly and “Breakout Events” to help struggling servers get a foothold back in the fight.

Check out the changes below.

Habib Loew, Gameplay Programmer at ArenaNetposted the news on the official game forums. Some of the updates are directly from forum feedback, others part of the teams longer term plans for WvW.

Advance notifications of new builds
It really does hit you low when you rustle up a good dozen or so seige weapons, ready to annihilate a keep you have been crashing against for the past hour, when the server announces that there’s a new game-build available. For those who aren’t educated in WvW warfare, siege weapons can be quite an expensive solution to breaking into a heavily defended keep. But when a new build is downloaded, they don’t survive the transition, resulting in a huge waste of time and money.
Now ArenaNet are going to give players a bit more time in advance to announce a new build is in the works, allowing players to make judgement calls on whether to commit to siege weapons to battle.
Alt+F4 is an escape no more
A personal peeve, players will without honor Alt+F4 if they’re about to die, resulting in them escaping your grasp.
ArenaNet have now changed it so doing the latter will always result in your death while you’re in WvW. Not only that, but you will take death penalties and you will still drop loot and XP.
No more insta-build walls & gates
As it stands, if you get any supply to a destroyed wall/gate, it will instantly repair, giving the attackers another grueling task of tearing it down. This can be exploited almost to constantly interrupt an attacker’s progress.
Now gates and walls will only ever rebuild once they reach 10% of their maximum health. Attackers also can now damage the gates/walls while their rebuilding if they have any health whatsoever.
Breakout events
Some WvW fights inevitably push back to a server’s spawn point, while the winning side proceeds claim the entire map. Without good co-ordination, it’s a mountain of a task to gain a foothold back in the map.
ArenaNet have introduced “Breakout events”, which will occur if a team loses control of all defensive structures, not including supply camps. An NPC Commander will spawn at the servers base and will rally all the players on the map. Once the commander has enough players he will initiate an attack on a nearby structure with his trusty Dolyak, which gives everyone maximum supply. He grants a defensive boon to all his players which makes their assault a force to be reckoned.

These changes sound really exciting. What do you guys think?