With season one of Guild Wars 2’s living world concluded, the heroes of Tyria have no doubt been an aimless lot, getting fat and lazy without an end of the world crisis needing their attention. Even now they’re relaxing while enjoying the Festival of the Four Winds and reliving Guild Wars’ greatest moments. But the serenity is not going to last.

Once the festival ends, “the fight begins,” says ArenaNet. 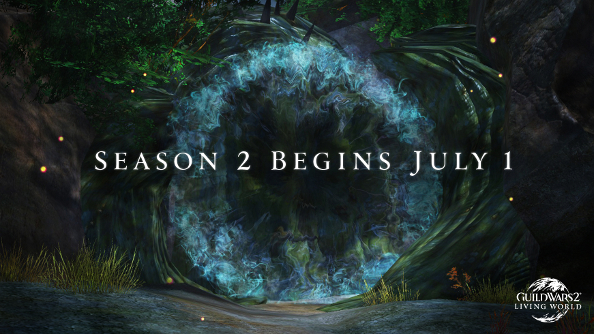 The second season of the living world will commence on July 1st, so heroes should make the most of this period of relaxation.

The previous season was a year-long campaign spread across many events, culminating in a siege in Lion’s Arch and a giant drill floating in the sky. But with Scarlet Briar’s death, the day was saved… sort of.

The announcement image is meant to be a clue to whatever new crisis is about to kick off. Sentient portals primed to attack? A new Stargate series that threatens all of Tyria? Mad Asuran scientists?