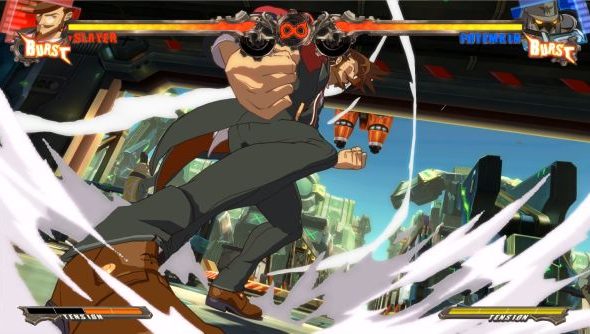 The long strides of the ports, and fighting games in general, continue on PC as Arc System Works bring their premier fighting game to PC in just a couple of days. Guilty Gear Xrd -SIGN- continues not only the nearly two decade old series of fighting games but a much longer practice of silly subtitles. It’s also a complex and beautiful fighting game in its own right, and will be joined by four of its brothers from the developer in a set of ports over the next 12 months.

More of a Street Fighter guy? Here’s all the characters from SF5.

I have a pretty massive soft-spot for Arc System’s games, especially BlazBlue and Guilty Gear. I’ve played them relatively little, but they always have impressive showings at tournaments I watch and they’re absolutely beautiful. Xrd -SIGN- in particular has absolutely incredible 2D and 3D work between its backgrounds and animations and may be one of the prettiest games I’ve ever seen. It also has one of the best soundtracks ever and a far more fully-featured storymode than its Capcom cousins.

The Steam version won’t be getting many additions over the well-received console releases. Netcode has been decent across their other Steam games and you should be able to get a match easily. Don’t expect to go out there and rock the world, as with the majority of fighting games, there is already an elite more than ready to kick your ass. They also might celebrate too early and give you the win, of course.

Arc System Works have also announced that four more games will be ported to Steam over the coming year. I’ve never heard ofRiver City Super Sports Challege ~All Stars Special~, but it’s in there, but can tell you good things about the other three. All the BlazBlue games have been excellent fighters with art as lovely as Guilty Gear, andChrono Phantasma Extend is no different. Melty Blood is an old, very hardcore series that I’ve seen played once to a high level – it’s great, but has combos so complex and long you might fall asleep, at least from what I remember. Actress Again Current Code is the final version of that. Lastly, Under Night In-Birth Exe:Late is by the same developer, has the best name in videogames and uses a similar system to Melty Blood.