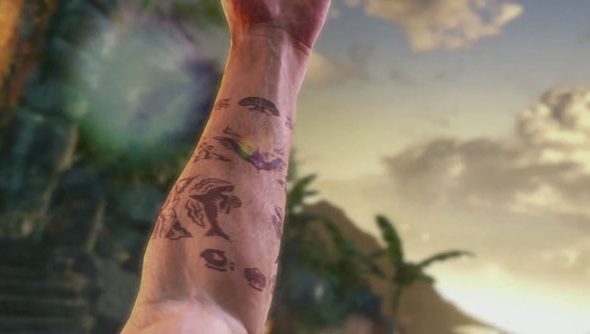 Copyright law is guided by precedent, and recent signs point to future trouble for publishers with real-world tattoos in their games. Legal tongues were sent wagging after the body artist behind Mike Tyson’s face thing settled a Hangover lawsuit with Warner Bros. two years ago. And now the scribbler of professional mixed martial artist Carlos Condit’s ribcage lion tattoo, seen in UFC Undisputed, has approached a US bankruptcy judge to value the worth of an infringement claim against THQ.

Under US copyright law, tattoo art qualifies for protection as “an original work of expression fixed in a tangible medium”.

The artist in question, Christopher Escobedo, originally sued THQ back in November. Thanks to THQ’s expiration shortly thereafter, his lawsuit has since played out in bankruptcy court.

Escobedo initially filed a claim for $4.16 million – by his reckoning, he was entitled to a 2% cut of all post-bankruptcy sales of UFC Undisputed. The bankruptcy judge disagreed, instead valuing the claim at $22,500 – the same amount Condit himself was paid for the use of his image in the game.

Here’s where things get interesting, however. Escobedo’s attorney asked the judge to reconsider. He pointed out that 4.1 million units of UFC Undisputed had been sold, and that former Interim UFC Welterweight champion Condit was one of the “most popular figures” in the game. Furthermore, the tattoo in question is reportedly visible for a full 15 minutes in the game’s opening.

Therefore, he suggested, the court should determine “what royalty a hypothetical negotiation between Escobedo and THQ would have produced” – adding that the tattoo image was in some respects more valuable to THQ than the music licensed for the game.

“THQ had literally millions of songs to choose from when deciding what music clips to include in its games,” read the motion for reconsideration. “There was no restriction on their choice. Thus, they had the opportunity to choose the least expensive music license they could get. To produce a UFC computer game, however, THQ had a limited number of fighters to choose from and had no choice but to either not include the fighter’s tattoo on the avatars or include it.

“That fact alone would have placed Escobedo in a very different bargaining position than the music publisher and makes it likely that Escobedo would have negotiated a per game royalty rather than a one-time fee.”

In response, THQ’s reps made a series of persuasive points: that one tattoo among over 100 fighters represented “exceedingly low value” (somebody ought to check these documents for the name ‘Kipling’); that there was a “likelihood” that a tattoo on another person’s body wasn’t copyrightable; that Condit’s licensing of his own image probably covered the tattoo too; and that, in any case, Condit should be considered the inky lion’s “joint author”.

The bankruptcy judge ultimately kept his valuation at $22,500 – THQ had moved for a slightly cheaper $0 – but Escobedo is now appealing the order to a group of judges on a bankruptcy appellate panel.

After racking our brains for prominent in-game tattoos, we’ve come up with only BioShock Infinite and Far Cry 3: though I reckon their wholly fictional conception leaves 2K and Ubisoft safe from this sort of thing. Can you think of any others?

Thanks to @gamerlawand the Hollywood Reporter for this one.