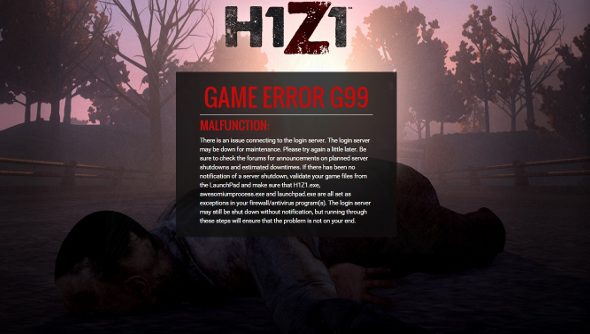 Attempting to login brings up an error code: G99. “There is an issue connecting to the login server. The login server may be down for maintenance. Please try again a little later.”

SOE President John Smedley wrote that the login server was being reconfigured on Twitter.

Since that was a better part of an hour ago, I just checked again, and was immediately kicked out of the game, to the H1Z1 site, where I was greeted with the G99 error page. A second attempt didn’t even get that far, and wouldn’t let me get past the launcher.

Nick’s still streaming the launch, but until this is fixed, you’ll just have to watch him play Hearthstone instead.