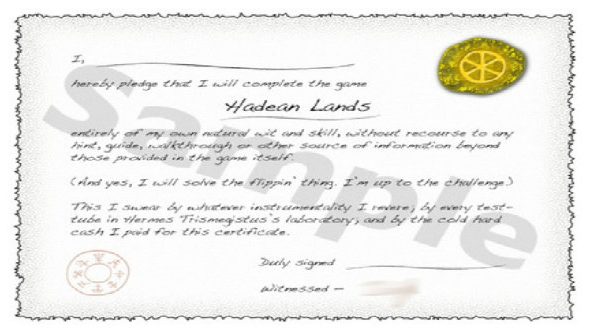 Hadean Lands isn’t like most modern games. It has no graphics or sounds, for a start. It’s an old-school text adventure that tells the story of an alchemist stranded on an alien planet. It also has a premium – and extremely bizarre – DLC.

Wondering what we class as the best indie games on PC? Check out that list there.

Hadean Lands has a $35 DLC that’s literally a PDF. It’s a certificate that you can print out and sign. You’re supposed to write on it to say you won’t cheat by looking up guides. It’s a joke. It’s a $35 joke.

“This DLC pack contains a high-quality certificate saying that YOU, the player, solemnly promise to finish Hadean Lands without looking at any hints or walkthroughs on the Steam forums or anywhere else on the Internet,” says the official blurb under the DLC.

“That’s all! You print out the certificate, sign it, and hang it on the wall. This is strictly on the honor system. The DLC does not change the behavior of the game at all.”

It’s kind of ridiculous, but the game is pretty cheap. I’d think of it as a nice way to throw some more cash at the developer if you really enjoy the game, though obviously only if you can afford it. Not me, mind. I have better things to buy, like candles – $35 of candles.

The game itself is $11.99 and has received positive reviews.