If you look through the past year of videogame releases, you’ll notice a trend: roguelikes are everywhere. From Hades and Noita to Risk of Rain 2 and Going Under, a genre that was once dismissed as convoluted is now thriving with new ideas. But one tradition from the old school has withstood the passing of time: merchants and shopkeepers aren’t as harmless as they seem. Before we break down this curious roguelike tradition, we should let you know that there are minor Hades spoilers below, so continue with caution.

“I’d say my first encounter with ‘fighting NPCs that you shouldn’t normally fight’ was Ultima 1,” Crypt of the NecroDancer designer Ryan Clark tells PCGamesN, recalling the ’80s CRPG classic. “In these games you can generally fight anyone, including the developer Richard Garriott (known as ‘Lord British’) himself, and I remember being surprised by this when I was a kid.”

During his first time at GDC, Clark had the opportunity to meet Garriott, who was at the conference to receive a lifetime achievement award. Clark was up for an award for his first game, Professor Fizzwizzle, and the two got to mingling. “He was kind enough to speak to me for quite a while, and even told me of various ways to kill Lord British in the Ultima games. He talked about how players always found creative new ways to do it that they hadn’t been expecting, and how much they, as developers, enjoyed that. I guess it stuck with me!”

Cadence of Hyrule – an unlikely Switch-based Crypt of the NecroDancer and Legend of Zelda spinoff also developed by Clark – features a singing shopkeeper called Freddie. Because Cadence of Hyrule is a rhythm-based roguelike, Freddie makes his presence known with a series of chants that echo across the dungeon floors. If you happen to attack him or, say, leave a bomb by his side, he will die and leave all his possessions for you to pick up at no cost. In one of the next floors, however, you can expect to meet his ghost – and he isn’t selling you his wares this time. He’s out for vengeance. 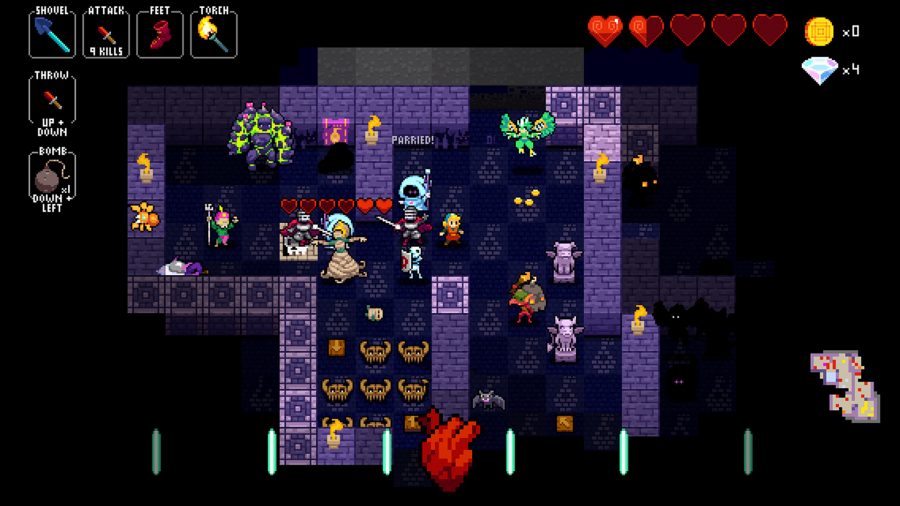 At first there was only one shopkeeper and no ghost, as Freddie would just disappear for the rest of the run, but this became too punishing over time as players had no means of replenishing supplies or upgrading their gear. Now, there are several types of vendors, as well as hidden shops, each with their own attack patterns and rewards if you upset them. A malicious variant called Monstrous Shopkeeper also has the chance to appear from time to time, possessed with red eyes and signing in garbled, distorted tones, ready to attack the player inside the shop even if unprovoked. “This catches new players off guard for sure,” Clark says, “and they’ll usually die, but whenever I’ve seen it happen to people for the first time they end up laughing out of shock.”

Thief is an all-time favourite game of Dave Crooks, designer on Enter the Gungeon, and he’s been looking for opportunities to steal from virtual shops ever since he played it. Doing so in The Legend of Zelda: Link’s Awakening invited such wrath from the shopkeep that it stuck with him for years. “It’s somehow even more satisfying to steal things in games where there is not a dedicated set of mechanics for theft,” Crooks says, “which is where I’m guessing the need for a highly punitive shopkeep was born.”

When the team at Dodge Roll sat down to discuss Enter the Gungeon’s shopkeeper, it was clear everyone wanted to include theft as a mechanic given their “direct inspiration” from Spelunky and Link’s Awakening. Laying down conditions was important considering how frantic Enter the Gungeon can be, as players often accidentally shoot the vendor when they’re off-screen. The first shot is met with a warning, the next attack results in the prices being doubled – any further transgressions and the merchant will retaliate with a spray of bullets that covers the entire shop floor. 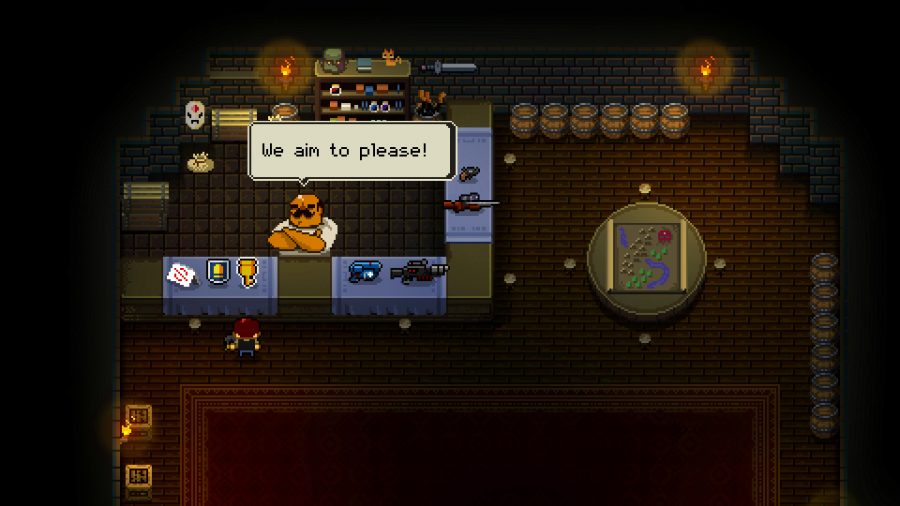 “We didn’t want the player’s run to be ended, or otherwise completely ruined, from an accidental trigger pull,” Crooks explains. “In a shop, a room associated with safety, this sounded like a bad time. The idea to raise the prices was mostly a joke, that also provided us with an extra buffer before we had the shopkeeper go full aggro. We hoped to create a setup where players would experience it once, but hopefully only have it happen again if it was intentional or they really messed up.”

Sometimes, merchant NPCs have been used as hidden boss fights. In Hades, for example, Charon wasn’t planned to be a hidden boss fight until Blood Price, the game’s latest major update before the 1.0 release. The team wanted to theme the update around Charon, who was the last character to be fully ‘unmasked’ with a complete portrait. But players weren’t expecting a secret encounter.

The idea came up during the team’s design conversations. “We liked the idea of a very tough, optional, late-game boss fight that players could opt into for some sort of reward,” writer and designer Greg Kasavin tells PCGamesN. “The event itself is a fun surprise when players first discover it, we see it getting a lot of laughs.” 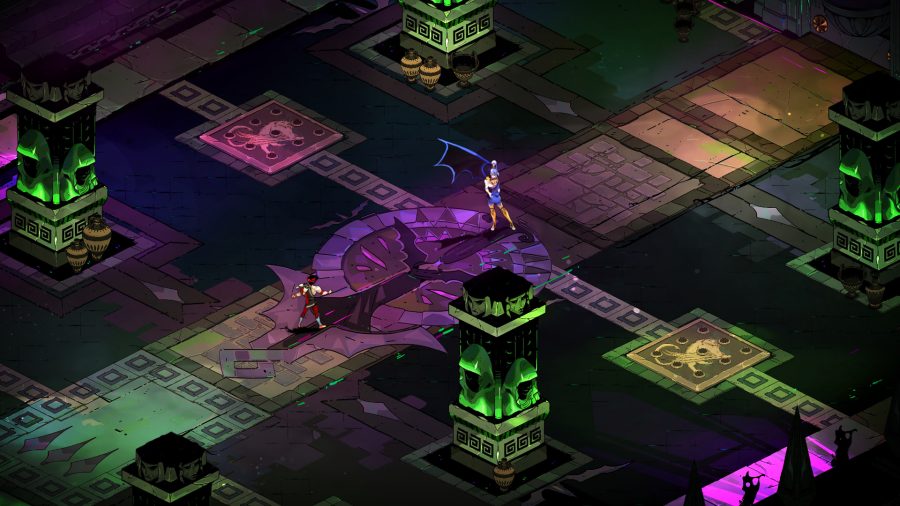 It was important, Kasavin explains, to make the encounter inherently risky yet equally rewarding. The opportunity to take on Charon appears in different stages of a run – challenging him early might be a death wish, but the reward is far greater, as players obtain a significant discount on his items for the remainder of the run.

Along with this, Supergiant Games wanted to achieve an intense and intimidating encounter that also felt a little bit silly and lighthearted. “Darren Korb, our composer, was into the idea of remixing Charon’s shop theme as this more sinister battle theme for the moment, and we added lots of custom animations, sounds, and voice lines too,” Kasavin says. “Like every boss fight in Hades, our hidden boss fight needs to be interesting across many playthroughs, so making it deep and varied was a priority from a design standpoint.”

The genre is characterised by having a sense of dynamism and surprise, and this tradition of merciless merchants is more like a genre in-joke that’s grown into a key mechanic through homage and iteration. “We consciously play into this tradition of ‘shopkeeper you can fight’, but above and beyond that, just having a shopkeeper character at all I think is part of the roguelike tradition,” Kasavin explains. 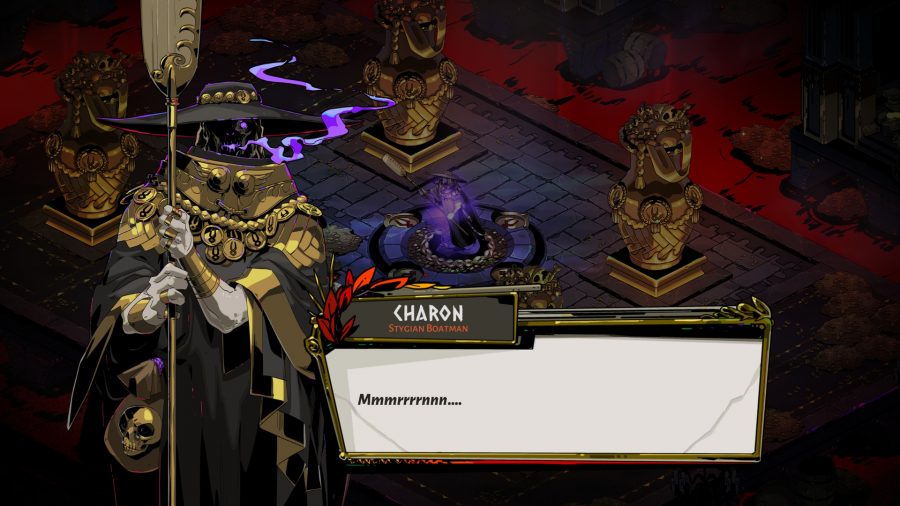 Whenever someone mentions the tradition, it’s likely that you’ll hear the name Spelunky as one of the main examples of vindictive vendors, integrating the risk/reward challenge almost as part of the core experience. “The shopkeeper in Spelunky was directly inspired by the shopkeepers in traditional roguelikes like Nethack,” creator Derek Yu explains. “I loved how you could interact with the shopkeepers and the shop items the same way you could interact with anything else in the game.”

In both Spelunky Classic and Spelunky 1, the shopkeepers didn’t go through too many iterations after they were added, but Yu wanted to make them a central part of the sequel’s design and to push them way further. This led to the presence of more complex characters that players could interact with in similar yet distinct ways, from mini games to short side-quests.

More like this: The best roguelike games on PC

One major change in Spelunky 2 is that the shopkeepers forgive the player more easily. “A lot of people don’t realize this, but in the first Spelunky you can be forgiven for stealing items if you can make it through a few levels without killing a shopkeeper,” Yu explains to us. “In practice, of course, it’s almost impossible not to kill a shopkeeper once they’re mad at you. For Spelunky 2, I wanted to make stealing without killing a viable strategy, which is why you’re forgiven after only making it through one level.” 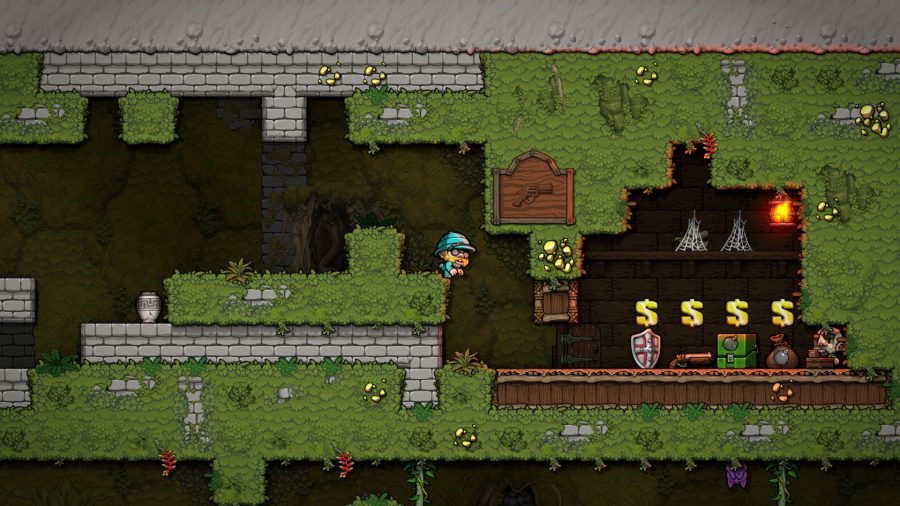 Despite being a surprise for newcomers of roguelike games, experienced players might be more wary of making a shopkeeper angry, or purposely look for ways to trigger the encounter, and start thinking of strategies around it. From discounts to the chance to get items for free, the temptation to batter rather than barter is ever present, and while it comes with a risk, the very act of balancing that against the reward makes these optional challenges compelling propositions for some.

We play into this trope of 'shopkeeper you can fight'

“In general I think that players agree that unexpected behaviours of NPCs, especially when antagonised or otherwise messed with, are generally delightful or can add to the mood of the game,” Crooks tells us. “In Enter the Gungeon it’s mostly played for laughs, but in Dark Souls the knowledge that accidentally attacking a merchant may have an instantly saved and permanent consequence adds to the oppressive feeling of never being able to relax that is emblematic of that game.

“I don’t know that I would go as far as to say that roguelike players expect violent retribution from a shopkeeper,” Crooks concludes, “but I would guess that most of them will try and find out early, and indeed may feel a small amount of disappointment to not get at least some insults out of the exchange.”