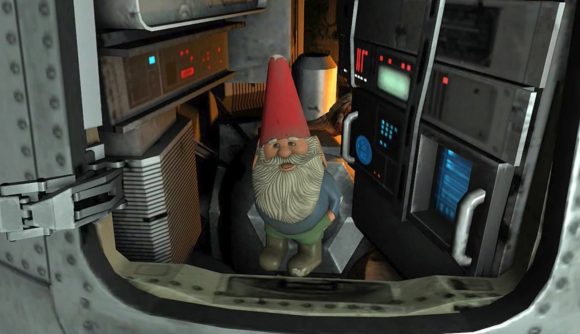 Just over 13 years after release, Half-Life 2: Episode 2 has got a new achievement that you won’t have to expend any effort in unlocking. Why? Because Valve chief Gabe Newell has successfully punted the old PC game’s beloved Gnome Chompski into space.

The achievement is called “Gnome Along“, and reads: “If you are reading this achievement, Gabe Newell has successfully launched Gnome Chompski into space”. It’s an enduring finale to Newell’s recent charity drive where he pledged to donate $1 to The Starship Foundation – a children’s hospital in Auckland, New Zealand – for every person who tuned in to see the garden ornament get launched into space via Rocket Lab’s livestream or Twitch channel. The event itself was a collaboration between The Heart of Racing, Rocket Lab, and Lord of the Rings special effects, props, and sets maker Weta Workshop. As you can imagine, it was a success, and the knick-knack is now in orbit.

Half-Life wasn’t the only Valve game to get an achievement to mark the occasion, as Left 4 Dead got the same one, too. The space-faring gnome appears in both games in various ways but is most infamous for the achievements he’s tied to. In Half-Life 2: Episode 2, you could unlock an achievement called Little Rocket Man if you managed to carry the garden gnome from the start of the game to a rocket ship toward the end of it.

As for Left 4 Dead, you could get one called Guardin’ Gnome if you managed to carry the little fellow to a rescue chopper. It’s also quite some distance, fittingly.

If you’ve been out of the loop, Gaben has been in New Zealand since March this year. He had been visiting the country when the COVID-19 pandemic broke out around the world. Launching gnomes into space aside, he’s been quite busy! He’s created a New Zealand-based car racing team to raise funds for Starship and organised a free ‘thank you’ concert to, uh, thank everyone in the country for their hospitality.