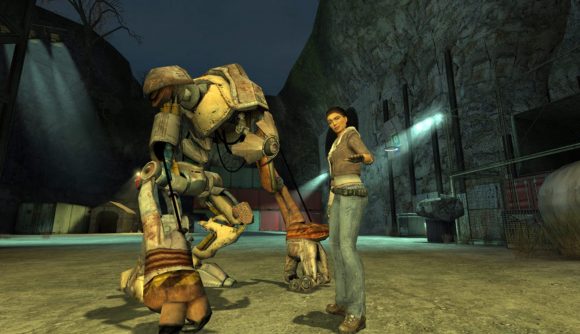 For a brief period last night, it was possible to buy a new Half-Life game on Steam. But rather than building on the story of Gordon, Alyx, and the Combine, however, the game – which was temporarily named Half-Life 2 Pro – put you in charge of running a fire department.

Bezirk, as the game is now called, is a fire department simulator. Neither its developers nor its publishers have another project to their name, but for two hours last night, their game was renamed to become part of one of gaming’s most famous series.

Bezirk’s store page has been around since September 2018. Since then, a few administrative tweaks have taken place, but the page had largely been quiet for months. Then, according to Steamdb, the game’s release date, categories, and store name were removed on January 6. The game existed in some sort of limbo for three days, until it reappeared yesterday. The new release date read January 9, but the name Bezirk was gone, replaced by Half-Life 2 Pro.

‘Half-Life 2 Pro’s’ moment in the sun lasted for about two hours, before its store name was changed back to Bezirk, but that wasn’t before it had attracted some attention. Syama Mishra, the creator of Twitter bot TodayOnSteam, flagged that the game had apparently released with the new title before its name was reverted.

Admittedly, media attention attached to the Half-Life name is probably exactly what Bezirk’s developers wanted when they tried their cheeky title-switch. Sadly, however, that gamble doesn’t seem to have paid off – while the game’s store page remains live, at time of writing there doesn’t appear to be any way of actually purchasing it.

Related: Half-Life 2 episodes writer Eric Wolpaw is back at Valve

For a little clarity around the entire situation, we’ve reached out to Valve to ask around the process of changing a game’s name. We’ll update this article if we hear back.