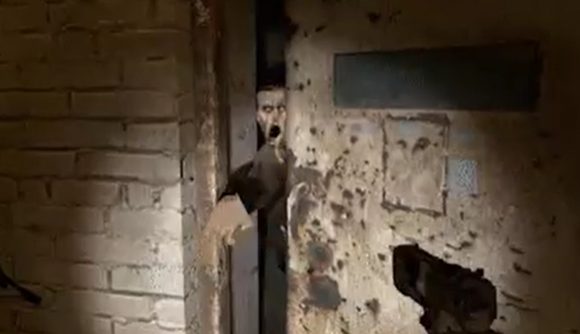 Episode 3 and Half-Life 3 are not the only mystery Half-Life projects that have been lost to time. After the release of Episode 2, Valve was working with Arkane Studios – the dev behind titles ranging from Dark Messiah of Might and Magic to Dishonored – on a fourth episodic Half-Life 2 expansion, titled Return to Ravenholm. Today, in 2020, we finally have gameplay footage of that cancelled release.

The footage comes courtesy of documentary series NoClip, which will run a full program on the history of Arkane next week. NoClip has been promoting the release with a series of clips and images from games that will be covered – today, that’s Half-Life 2: Episode 4. The brief clip shows a player standing off with a zombie, which rips a door off its hinges before being dispatched by a pistol melee attack.

It’s clearly a Source Engine game built on Half-Life 2, though the traditional zombie enemy, its interaction with the door, and the melee attack are all new additions over the previous expansions.

Check out the brief footage below – the first image appears to be from LMNO, a cancelled collaboration with Steven Spielberg, so it looks like plenty of Arkane mysteries are soon to be solved.

Former Valve Writer Marc Laidlaw confirmed years ago that Valve was working with Arkane on a project called Return to Ravenholm – which had previously surfaced under the ‘Episode 4’ banner on the resumes of Arkane employees. Laidlaw told Half-Life fansite LambdaGeneration that the project was eventually abandoned because the setting was “pretty much played out”, and the necessity of using a prequel to return to Ravenholm had proved too much of a “creative constraint”.

We’re likely to hear more on what Return to Ravenholm would’ve looked like when the NoClip documentary premieres next week.