G String wasn’t supposed to be a game. The idea stemmed from a series of architectural study maps for Gmod that creator Eya Eyaura then spun into a conversion mod of Half-Life 2. It wasn’t supposed to go anywhere, either. After the beta for G String was released, Eyaura wanted to leave it behind but inevitably couldn’t. “I was in a bad place,” she tells us. “Nothing was happening for me, but I kept getting feedback about G String, so I kept working on it.”

Almost 13 years later and G String has just released on Steam, a far cry from the Half-Life 2 conversion mod it once was. The cyberpunk shooter tells the tale of Myo Hyori, a bright teen in a dark future and a metropolis that’s on the brink of imploding. There are light environmental puzzles to solve, and a plot to follow through a long campaign. What was once a mod is now a fully fleshed out PC game.

While G String has various cyberpunk themes and undertones, they weren’t there at the start. “The whole cyberpunk vibe wasn’t intentional,” Eyaura says. “Growing up, I never even thought I could make a game, let alone a shooter. It was not an option in my mind. It seemed too difficult. But it came together eventually.”

And yes, before you ask, we did enquire as to why the game is called G String. “Sometimes I prefer to avoid giving a straight answer,” Eyaura replies. “Maybe it has to do with DNA strands, or it alludes to the depraved nature of the future that’s being depicted.” 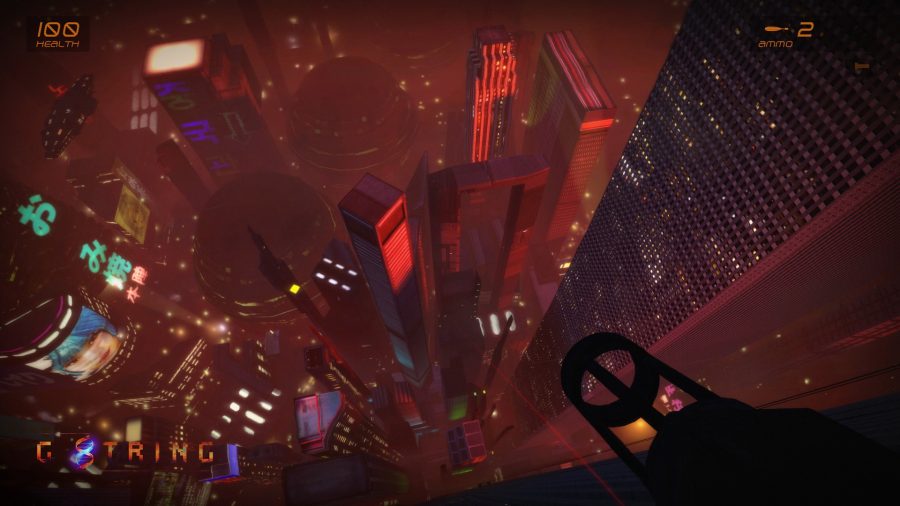 Eyaura is less cagey on the inspiration for that depraved future. Bladerunner stands out as a particular influence because the world reveals more than the narrative, while other inspirations include sci-fi films ranging from the ’70s to the ’90s, such as Akira, Ghost in the Shell, and Star Wars.

If there is a message, it's to clean up the planet

Typical works of cyberpunk tackle politics, class, the disparities of power, and whether technology can redress them. More often than not, though, they’re a cautionary tale. With that in mind, I ask Eyaura what G String’s relationship is to the genre, and whether it has anything it wants to say about the world and where it could be headed.

“Initially the mod was just post-apocalyptic rather than cyberpunk,” she explains. “Just a guy – yes, it was a male initially – wandering the remains of a deteriorated metropolis. It depicted a world where everything kind of went wrong and there is no hope. Well, there is, but it’s not immediately apparent. As I worked on the game and added in more lore and life it kind of turned cyberpunk-y and then I just went with it. 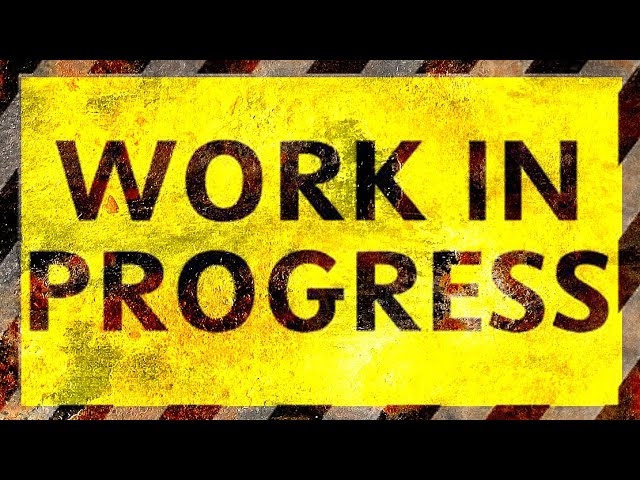 “If there is a message, it’s to clean up the planet, but I try not to point fingers. There is no one all-evil entity you can take out and then everything is solved. Mars wants to be free, the rich barricade themselves in their towers, while the poor fight back wherever they can. Everyone is doing their thing.”

Like tears in rain: all the best cyberpunk games on PC

This message is further reflected in G String’s backstory. North and South Korea came together, only to succumb to the climate crisis and end up under the sea, with their displaced citizens pushed in the direction of America. While you could see this as an opportunity to explore themes of societal tension, the setting is meant to further reflect environmental concerns. 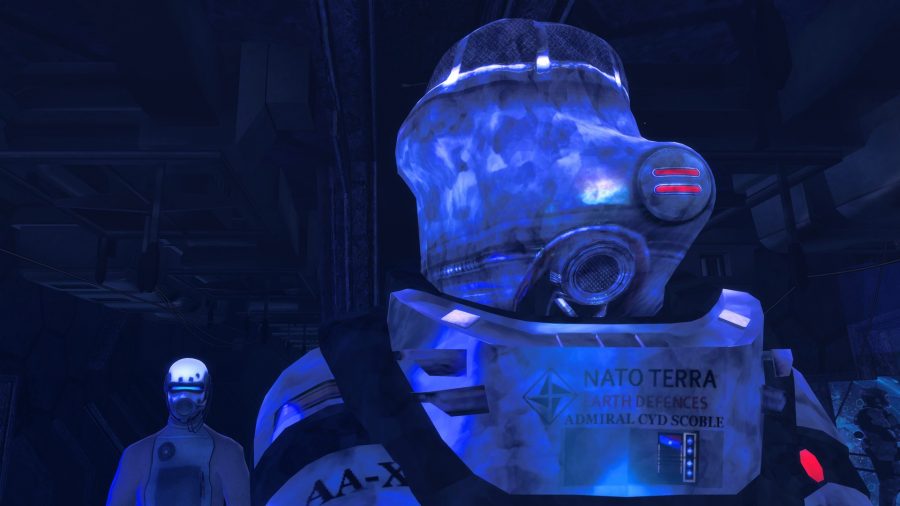 “Pollution leads to the idea that even the air isn’t free anymore, which brings us to climate change worsening to the point where many parts of the world are covered in water,” Eyaura says.

While G String takes Half-Life 2 and transforms it into something different, there are various gameplay elements that Eyaura wants to keep intact. A non-invasive HUD means you’ll get the information you need through the level design, and there’s no inventory, either – bringing us back to what Eyaura admires about Bladerunner.

“It’s like stripping away all the cumbersome elements and keeping the fun stuff,” Eyaura explains. “On the whole, G String probably turned out less run-and-gun but it still retains a lot of the momentum of the original [Half-Life 2] gameplay.” 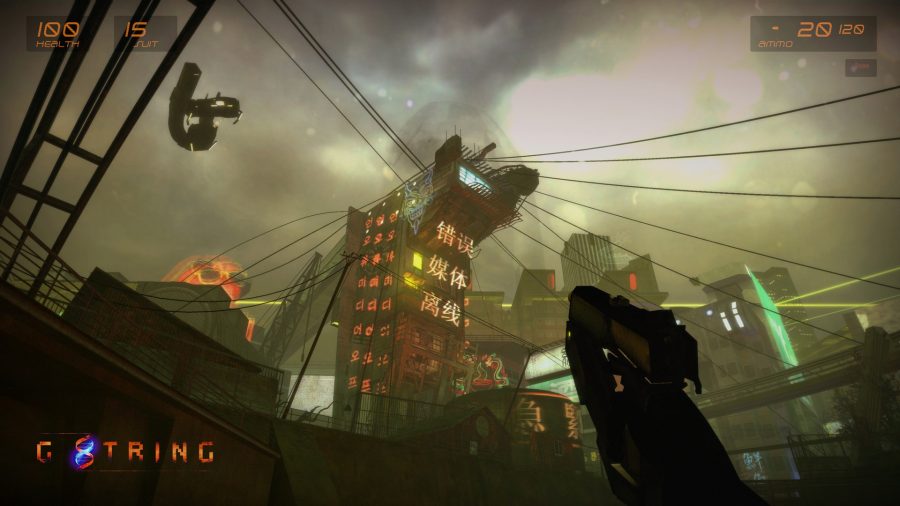 There aren’t many cutscenes, either, as telling the story through the level design was one of Eyaura’s aims. “On the whole G String ended up with more cutscenes than your average Half-Life entry but I tried to keep them as short as possible and visually interesting enough,” she explains. “Also, I inserted them in ways that are hopefully not jarring or distracting.”

The game’s Star Wars influences are immediately noticeable in the trailer when you see the battle in space. It’s an impressive set-piece, and unsurprisingly one of the hardest things Eyaura had to pull off.

“I couldn’t just look up some Source SDK tutorials to get help,” she explains. “Considering its length, it took a lot of time to put together compared to the rest of the game. I have had help with the coding and AI otherwise I couldn’t have made it. Luckily this was never meant to be a ‘huge vehicle section’, it’s more of an ‘epic finale’. 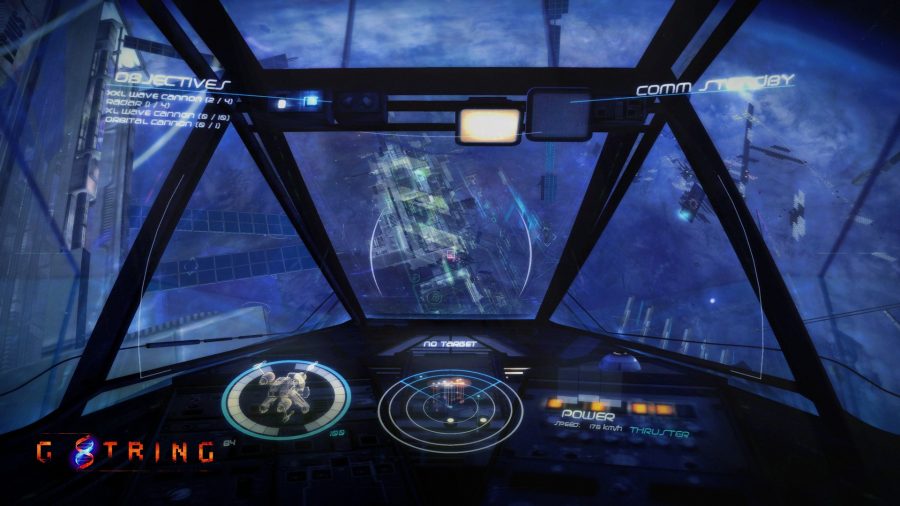 “I wanted to keep it relatively short as it’s somewhat experimental, and I’m not sure how people will react to it. I think it’s just long enough to give you a good taste of the off-world situation, but it doesn’t overstay its welcome.”

The time it took to complete was the hardest challenge

As a labour of love, it’s an apt climax for the mod itself. Developed solely by Eyaura, G String took nearly 13 years to make. Unsurprisingly, there were plenty of moments along the way when her commitment was tested. As the project ballooned and the finish line seemed forever out of reach, Eyaura was regularly tempted to cut corners or even give up entirely.

“Running into all sorts of technical difficulties and limitations was daunting,” she explains. “But it wasn’t the technical side of it. The time it took to complete was the hardest challenge, especially in the last three years or so. I contemplated all sorts of alternative scenarios to get it out sooner already. 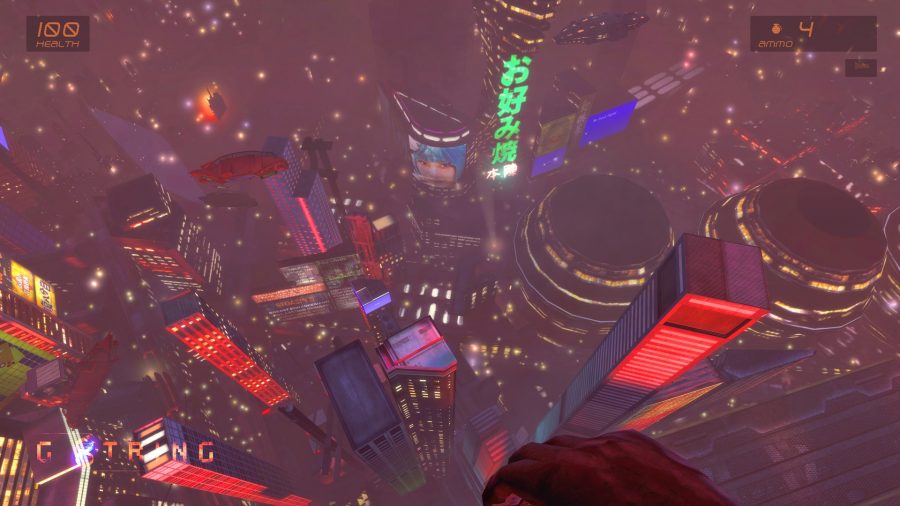 “Going episodic, cutting certain things – I pondered many options. But in the end, the unanimous opinion was that it’s best to go all the way, fix everything, and release all of it in one go.

“After a decade, what’s a few more months or years? Yeah, this thing took over my life. And, of course, financially it’s very hard. You can’t build something this big ‘part-time’. Eventually, it took over all my free time.”

Looking ahead: all the upcoming games on PC to look out for

For Eyaura, though, the early decision to put the mod into beta kept paying off. It brought a constant stream of not only useful feedback, but crucial, morale-boosting encouragement, too.

“I was willing to sacrifice year after year knowing that whatever happens at least I did my best. No regrets,” she says. “I always wanted to make a sci-fi thing, maybe a movie or not. It ended up beginning a game, and I’m fine with that. No matter what happens at least I know that I tried as hard as I could.

G String is out now on Steam.