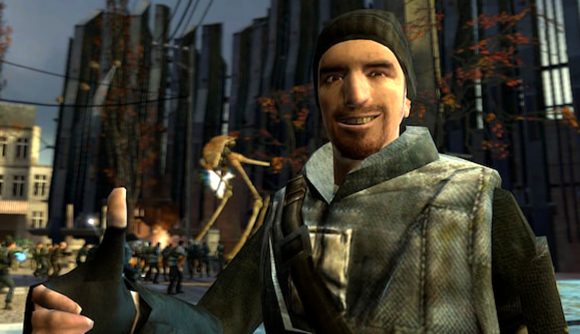 The Half-Life 2 community has rallied together to smash the peak concurrent player count record for one of the best FPSs ever made, pushing the total from a dismal 6,882 to over 16K – which is certainly a lot more respectable. Why did the community do this? To see if it could be done, it seems.

The Half-Life 2 ‘Breaking the Bar’ event was organised by fan community Lambda Generation, which wanted to see if the fans could push Half-Life 2’s concurrent player count peak up from the low 6,882 it appeared on SteamDB. It seems they succeeded in even beating the all-time peak of 12,953 players from 10 years ago. The new record stands at a much more respectable 16,101.

The problem with Half-Life 2’s records is that the game pre-dates most of Steam’s tracking features, as it was the title that Steam launched with in the most bare-boned state imaginable. By the time Steam had begun tracking things like concurrent player counts, most people had already finished Half-Life 2.

The ‘Breaking the Bar’ event kicked off yesterday, August 14, and by the end of the day, it was obvious that the bar had well and truly been beaten. Of course, the big question remains as to why this needed doing in the first place, but if the answer is either “for fun” or “to see if it could be done” then that’s fine by us.

Gongrats to everyone for breaking the all-time peak in Half-Life 2!

Furthermore, if the fan-made Half-Life 2: Remastered Collection shows up soon that’ll give everyone the excuse to go play one of the greatest FPSs ever made once again – even if it’s still missing an ending.