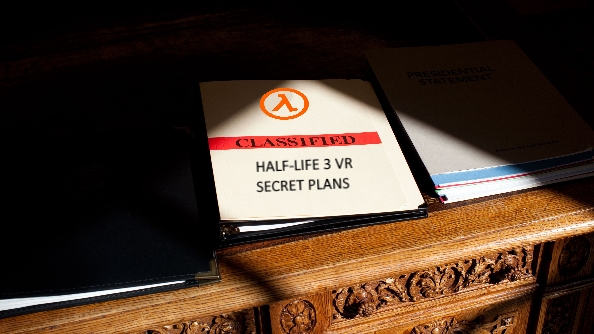 A third of Valve now currently works on VR. Wait, a third? As in, one out of three? Well, that’s Half-Life 3 confirmed then.

Got yourself an Oculus or Vive already? Then check out our picks of the best VR games.

In order to bring you the most important breaking stories, we broke into Valve (we didn’t) and snuck inside their VR department (we really didn’t) to steal the design documents for Half-Life 3 (that’s a lie, too). With the files safely in our hands, we can now reveal to you exactly what Half-Life 3 is, and how it will revolutionise FPS games for the next quarter-century.

Half-Life 3 is a HTC Vive V2 exclusive. The next generation of Vive, currently scheduled to be released in 2019, takes room-scale VR to the next level by allowing motion-tracked props and other peripherals to be used as part of the experience. The Half-Life 3 Vive bundle is forecast to cost $1500 and is shipped in a crate containing the game, a Vive headset and controllers, and five different sets of physical items that are used to increase immersion within the game.

In what may be initially upsetting news for long-term series fans, Half-Life 3 won’t continue the story of Gordon Freeman. Instead it allows players to dive back into familiar locations as part of a suite of five wacky VR mini games that really emphasise the rich feature set of Vive V2. 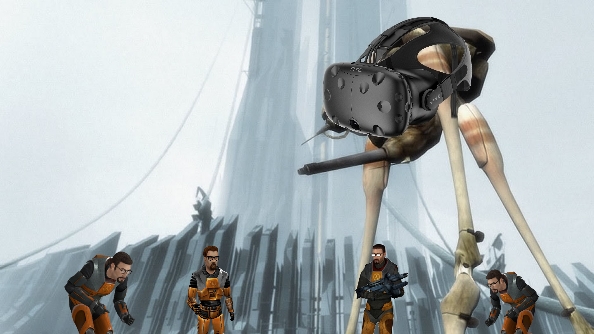 Taking real advantage of VR’s ability to transform players into something else, Strider Whack-a-Gordon places your eyes one hundred feet in the air as you embody one of the Combine’s walking tank/crab things. Down in the streets below you are dozens of Gordon Freemans, who constantly run in and out of buildings. It’s your job to spear them with your gangly legs as the Gordons dive from door to door.

Adding to the immersive experience is the use of Vive V2 Stilt Controllers, which not only raise you a meter up off the ground for that real sense of height, but are motion tracked and used in a similar way to the hand-held controllers. Now every sweep of your leg will be captured in the VR world, so just stamp away and squish those pesky scientists! 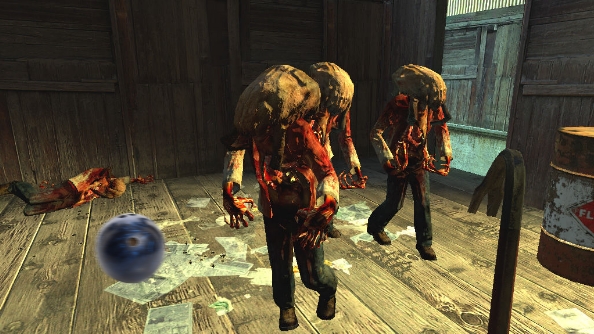 Remember when Nintendo won over an entire generation of gamers with that Wii bowling game? Well Valve have seen the logic in that and created a Half-Life-themed bowling alley. With a set of 10 headcrab zombies lined up at the end of a City 17 street, using the Vive’s motion-sensing controllers you can pick up any item from a rack of props and blast it at the groaning ‘pins’. Can you score a strike with just a paint bucket? Or will you go the cheat’s way and use a massive radiator?

As an optional bonus for those with extra-long living rooms, the HL3 Vive bundle comes packaged with a set of ten motion-tracked pins which can be knocked over with your own choice of household prop. The wall-mounted base stations can even map out items used and convert them into VR models, so if you wanted to beat down zombies with your gran, that’s perfectly possible thanks to the incredible power of Vive V2. 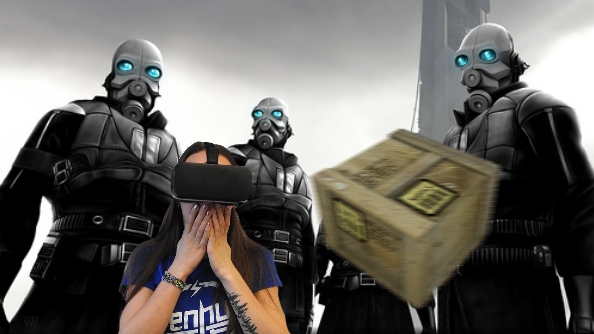 A real room-wide experience, the Smash-a-Thon puts a plastic replica crowbar in your hand and asks you to go swing crazy as Combine forces hurl wooden crates at you. The movement of items is achieved in real-life by a set of twelve ping-pong-ball launchers that are placed in a circular arrangement around your room. Each fired ball is tracked by the Vive’s amazing motion detector, and displayed as crates via the magic of VR. Hitting the balls with the plastic crowbar causes the crates to shatter in your VR environment. Incredible!

For increased difficulty, Combine forces may also throw flaming oil barrels at you. The danger of real fire is replicated in your home environment thanks to reservoirs in each ping-pong-ball launcher that can be filled with lighter fluid (paraffin may be unsupported due to software conflicts). Fire-proof HEV suits will be sold separately as RS-DLC (Reality Space Downloadable Content). 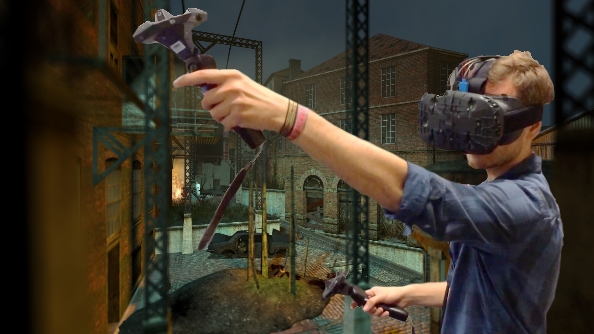 Trap Dodge lets players return to Ravenholm, the spooky, zombie-infested town from Half-Life 2. Thanks to room-scale VR you’ll be able to wander the streets of this terrifying place, and use of props will really emphasise the danger. The ping-pong-ball launchers from Smash-a-Thon have interchangeable tips, and for this game are used to launch circular saw blades across the room! Dodge spinning discs of deadly metal in real-life as you simultaneously blast zombies with Gordon’s iconic weapons in VR.

And for those with high ceilings, a RS-DLC car-drop is available, increasing the thrills as you try to prevent yourself being crushed by a falling family hatchback! 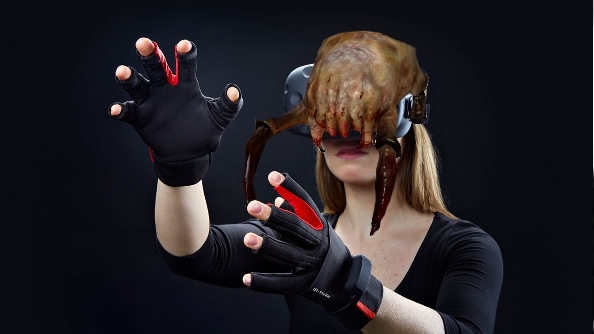 Half-Life has never quite captured the true terror of headcrabs. Until now, that is. Headcrab Simulator allows you to experience the grisly horror that is parasitic control by fleshy glob monster thanks to the bespoke hydraulic clamp system that attaches to the HTC Vive V2 headset.

The game is easy to play: strapping on the Vive places your head inside a virtual and physical headcrab. Through the 1080p screens you can see the pulsating inside of a headcrab, and the rubberised cover for the Vive device makes it really feel like a jaw is closing around your head. When the game starts, the clamp system gradually applies increasing pressure to your skull, so you need to wrestle the device from your head in a tense test of strength! Succeed, and you’ll live to play another round. Fail, and your head will burst like a watermelon for a truly epic finale!

So those are the five absolutely real challenges that will be part of the Half-Life 3 VR collection. But what mini-game madness would you like to see in the inevitable season pass? Suggestions in the comments may be passed on to Valve, who will definitely read them.