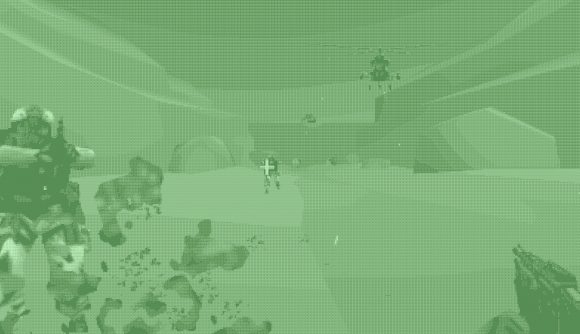 We may be none the wiser for Half-Life 3, but that hasn’t stopped the community from finding cool, new ways to play the original Half-Life. The latest is Half-Life GB, a Game Boy-style remake that makes Valve’s FPS game even more surreal than usual.

Made by developer Jackarte, Half-Life GB supplants the typical browns and greys of Black Mesa for multiple shades of green, in a 3D environment that, missing many of the finer details, is just a bit unnerving. A 15 minute demo, viewable below, shows a play-through of Half-Life’s iconic opening, wherein Gordon Freeman finds himself in the middle of an inter-dimensional invasion after one of Black Mesa’s experiments malfunctions.

Wielding Freeman’s trusty crowbar, you batter headcrabs and headcrab zombies, wandering through corridor after corridor in hopes of escape. The demo stretches as far as Freeman getting to the outside world, where a platoon of marines has been sent to kill all survivors and cover-up the incident, and you battle helicopters and tanks and such. This is definitely stretching the capabilities of the base handheld, but it does strike a Wolfenstein 3D-like middle-ground that has its charms.

You can find Half-Life GB on Itch. This is just the latest triple-A project to get boiled down to something akin to 8-bit or 16-bit. Yarntown did the same for Bloodborne, and both Disco Elysium and Deadly Premonition have been boiled down to Game Boy form.