Update 20 Jan, 2016: A release date has been set for the standalone version of one of the best ever Half-Life mods.

Sven Co-op, as reported a few days back, is going standalone. Far from just adding co-op to the first Half-Life, proving everything is better with friends, it’s not a whole instituition of its own, with thousands of maps made by a budding community over the last decade and a half. It’s going to be downloadable through Steam, making it far easier to get your mitts on, while remaining totally free.

The announcement came via the official forums, where original creator Sven made a post on the 17th anniversary of the game. In it he revealed the release date, reconfirmed the price tag and said what version 5.0, as it’s known, will offer:

“The stand-alone game includes many hundreds of features, fixes and improvements, as well as new maps and content. Valve have also kindly allowed us to include their original Half-Life campaign free of charge, playable cooperatively even by people who don’t own the original game! New features have allowed the co-op version of the storyline maps to be reworked in a way that stays true to the original game while remaining challenging for multiple players.

“Additionally, thanks to Valve providing us with a Goldsrc license, the team had been able to update the engine itself to allow Sven Co-op and its maps to surpass the limitations of standard mods. The Steam release will also allow for easy installation, frequent iterative updates, and eventual Steam Workshop support.” 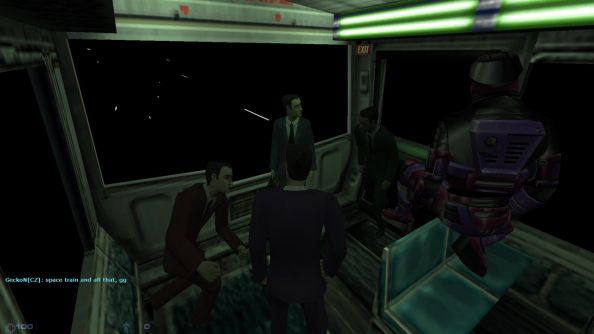 Good stuff all round. You can read the post if you like, while the official change log details the humongous number of new additions to the mod in its move to standalone. Maps are roughly a thousand times larger, there’s new models for almost everything, an entirely new scripting engine, better AI – it’s a wholesale update of Half-Life to make it easier to mod and more fun to play while maintaining its original look ‘n’ feel.

Original Story 13 Jan, 2016:Sven Co-Op, for those unaware, is a 17 year-old co-op-focussed Half-Life mod that lets you play Valve’s seminal FPS with friends. It’s only now heading to Steam – where it’ll come free-of-charge, even if you don’t already own the original Half-Life – and today released an official trailer for its full release version 5.0.

Since gracing the scene way back in 1999, Sven Co-Op has enjoyed somewhat of a cult following in its intervening years – much similar to era cousins Action Quake 2, The Specialists, and Action Half-Life.

In 2013, aware of the mod’s enduring following, Valve gave the tireless Sven Co-Op team their blessing to develop the mod into a full release on Steam, and also granted them access to their GoldSrc engine – the very one that powers Half-Life itself. By August last year, the mod – that lets you fight against computer-controlled baddies alongside a pal, or to play through Gordon Freeman’s trip to Black Mesa with a few right-hand buddies – had entered closed beta testing.

Today, after a few months of relative silence, the Sven Co-Op crew dropped an official trailer and announced that their long-awaited co-operative slant on Half-Life will be “available soon for free on Steam.” Here it is in its two minutes of glory:

“We hope you will enjoy this 2 minute introduction to our game, which also includes footage of some new maps and features,” reads a post from Nih on the game’s website. “Also featured: Our new main menu theme by Pavel_Perepelitsa! The video itself was created by Mr. Mazur. Since we still get a lot of questions about this: Remember, Sven Co-op 5.0 will be available for free on Steam, even if you don’t own Half-Life 1. And this includes our Half-Life Singleplayer conversion.

“That is all for now. Expect more media and information about 5.0 in the near future! As a side note, the first version of Sven Co-op was released on January 19th, 1999… That means SC’s 17th birthday is in just 7 days! Wow! Who knew Sven Co-op was so old, huh? I don’t know about all of you guys, but here on the Sven Co-op team we will be celebrating that day!”