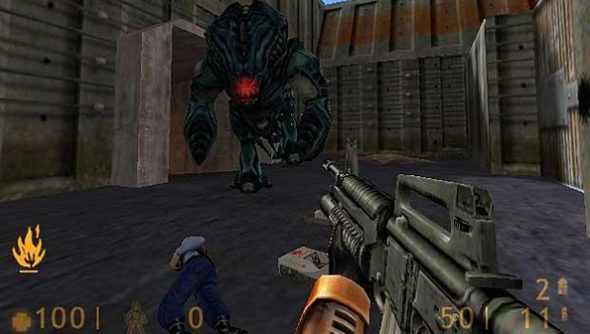 Rather infamously, the original Half-life was heavily censored in Germany. The version released over there was quite drastically-overhauled to suit entertainment guidelines at the time, but that’s now been lifted. It only took nearly two decades.

If that’s got you feeling nostalgic, why not check out our list of the best old games.

The German edition of Half-Life changed a bunch of details. For starters, barnacles – those awful ceiling aliens that eat anyone passing by – burped out screws when killed.

Enemy soldiers were changed to robots, and they burst into electrical components when killed. Scientists and other allies just sit down and shake their heads at players who try to kill them, eventually vanishing into nothing.

Headcrabs flopped dead unceremoniously and bloodlessly, phasing out of existence after a few seconds post-death. Watch the video embedded above if you want to see some examples. It’s pretty funny how bad it is.

According to Schnittberichte, those rules no longer apply. In theory, this means German players should be free to play the uncensored version, but whether it’s as simple as that is another matter entirely. Perhaps Steam support can help.