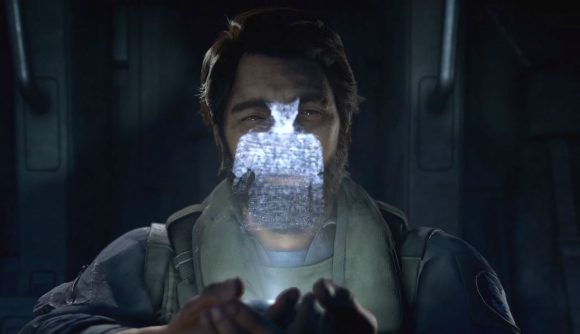 Halo 2 helped usher in the world of marketing-driven ARGs with I Love Bees, and Halo’s promotion and lore have been expanded by obscure secrets ever since. It looks like we might get something similar in Halo Infinite, too, as players have begun to find secrets hidden in the game’s E3 trailer – just a month-and-a-half later.

In the middle of the Discover Hope trailer, as Master Chief is getting powered up, a number of red marks flash across the screen. Twitter user Xepyal pieced those marks together to find a QR code, which in turn offers up a link to a piece of audio. The audio features mysterious sci-fi sounds, some heavy footsteps, and then Cortana says “This… this is part of me. I don’t know why, I don’t know how, but it is me.”

This may be a dead-end – just a fun easter egg for people who watched the trailer too closely – but the audio matches closely with the video at the end of the trailer, and the URL itself seems to be made up of the same coordinates that appear briefly on a screen in the ship during the video.

Multiple 343 Industries devs have commented on the discovery, so it’s certainly something – but just how deep it leads remains to be seen.

If you want to do some sleuthing for yourself, you can rewatch the trailer above.

The Halo Infinite release date is set for late next year, but in the meantime you can follow that link for a collection of the details we’ve heard about the game so far.