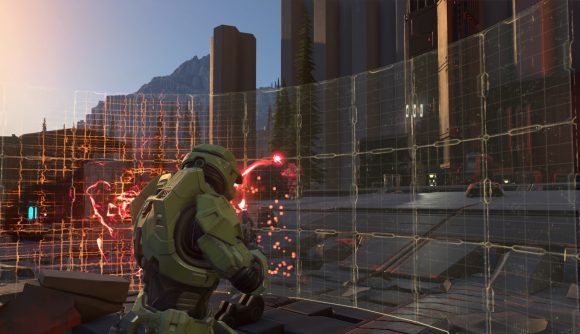 The Halo Infinite release date will see the expansive Halo title launch on a pretty wide variety of platforms, including Xbox Series X, PC, and the now-venerable Xbox One. Today’s Halo Infinite gameplay demo was part of a show dedicated to highlighting Xbox Series X games, but it wasn’t technically running on the next-gen console – instead, it was presented on a PC with similar specs.

“The game was captured from a PC that is representative of the experience that players will have on Xbox Series X”, a 343 dev tells press during a Q&A session. Demoing a PC version of an in-development game in lieu of a console version is not uncommon, especially for titles in development on as-yet-unreleased hardware platforms.

The mission we see in the demo footage comes from a point “roughly halfway” through the game. The Pilot, who was introduced in last year’s E3 trailer, serves as a foil for chief throughout the game. 343 says he’s “the most human character we’ve ever created in the franchise”.

You can check that demo footage out below.

Halo Infinite’s open world will split the difference between a true open-ended environment and a more traditional Halo experience, though the devs are reticent to spill much of what that means in practice just yet.