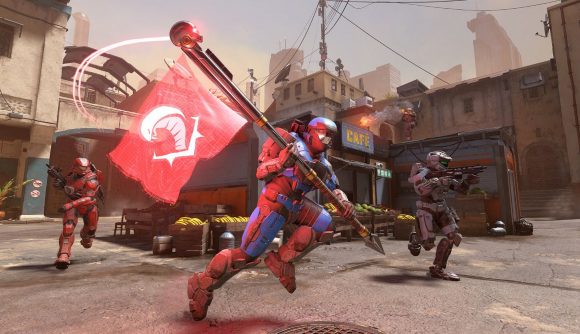 Get ready for a bit of a shakeup to Halo Infinite’s competitive ranking system. 343 Industries has revealed that the FPS game’s CSR system has been a bit “overly generous” since its launch, so the devs are resetting CSR ranks “so that everyone can get an updated CSR that is more indicative of their skill”.

That’s according to a post from community manager John Junyszek on Halo Waypoint, who explains that the studio is rolling out changes to “help bring things closer in line to where they should be” with the CSR system. “This period led to a full tier inflation of ranks and, as a result, most players should expect to be placed a full tier lower (Diamond players will find themselves in Platinum, Platinum players will find themselves in Gold, etc.) after this rank reset,” Junyszek says.

The exception to this comes with a change the devs are making due to this rank reset popping up mid-season. While Diamond 1 was the highest CSR players could hit after their ten placement matches previously, the devs are now raising this to Diamond 5 to help reduce disruption. So, while most will remain relatively unaffected, Onyx players will “spend less time in Diamond since the system already knows that they are likely an Onyx player”.

This reset comes in combination with a skill rating improvement update to the game’s backend. This will make Halo Infinite’s system better at determining a player’s skill and placing them accurately among the game’s skill distributions.

Since launch we've been studying player ranks and ranked matchmaking in #HaloInfinite closely. Next Tuesday, we're excited to roll out updates to our current system and reset CSR ranks in matchmaking. Learn more about the upcoming changes on Waypoint!

343 is aiming to get all of the updates and the rank reset live sometime in the afternoon (presumably PT) on February 22, so keep an eye out for downtime followed by some big changes then.