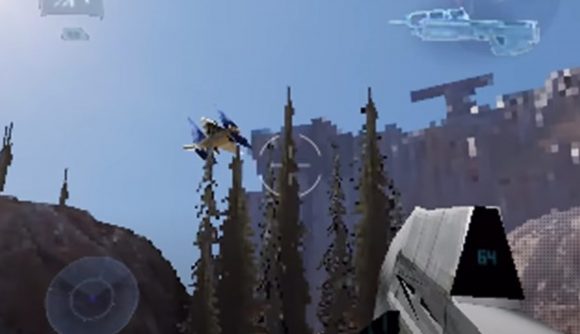 Cast your mind back to 1999. Slipknot’s debut album is all the rage, everyone’s trying to work out how they feel about Star Wars: Episode I – The Phantom Menace, and Pokémon has only just started taking over the world. You own a Nintendo 64, and you’re just about to dig into the latest FPS game to come out, Halo Infinite.

This, of course, isn’t what actually happened, but thanks to YouTuber Hoolopee’s Halo 64, we can imagine. The video is a remake, or a demake, rather, of Halo Infinite’s gameplay reveal trailer from the Xbox Games Showcase, made in the style of an action-adventure game for the Nintendo 64. The opening cinematic is involving Master Chief and the unnamed Echo-216 pilot is replicated pretty well, minus trading the voiceover work for hilarious mumbles.

Once the ship crashes, we get a brief start screen before it’s Master Chief on the ground, assault rifle in hand. The fidelity of the environment, and the smoothness of the movement, are spot on recreations of Infinite’s beautiful vistas in the N64’s limited capabilities. The Chief slaughters a few grunts, spots a very Star Fox-looking ship flying overhead, then hops into a warthog for a lovely drive. That’s when things take a turn. No spoilers, but it’s worth watching.

We still don’t know the exact Halo Infinite release date, but we do know that the space game‘s multiplayer will be free-to-play, and that 343 Industries’ sequel is coming to Steam.

Hoolopee has several other escapades in animation and editing on his channel, including Death Stranding as a PlayStation 1 game. Kojima’s latest adventure game came out on Steam only a few weeks ago, and we enjoyed it. If you’re looking to do some stranding of death, we have guides on how to beat Beached Things, how to deal with MULE camps, and how to unlock vehicles.