The original Halo Wars was a perfectly acceptable Xbox 360 strategy game of the base-buildey Starcraft mold, released in 2009. Age of Empires veterans Ensemble Studios had the unenviable task of making an RTS game actually fun to play using a gamepad, and they delivered in a credible, no-nonsense way, bolstering their game with a good story that reeled in scores of adoring Halo fans.

Seven years on, and it’s now 343 Industries and Total War makers Creative Assembly at the helm, as Halo Wars 2 steadily glides towards PC and Xbox One. On the face of things, their job is made easier by the fact that they’re inheriting a solid gameplay formula and gamepad control scheme from the first game. But now they face the added challenge of making a game not just for Halo fans and strategy-starved console gamers, but for PC – the almost exclusive stronghold of the RTS genre.

As I sat down for some hands-on time with Halo Wars 2 at 343 Industries, intriguing words like ‘MOBA’ and ‘Playing cards’ that were bandied around by the devs bounced around in my mind like those text-based Windows 95 screensavers. I wanted to know how these hip buzzwords translated into gameplay mechanics, in what on first impression appears to be a traditional – old-school, even – RTS game.

The Halo Wars 2 campaign picks up 28 years after its predecessor, and an as-yet unspecified amount of time after the events of Halo 5: Guardians. The story is tied into the wider Halo universe more than its predecessor’s, and delivered through swanky cutscenes courtesy of BLUR Studio. In the first of these, we see a trio of Spartans get duffed up by a big new baddie called Atriox – an instantly likeable villain who rebels against the also-villainous Covenant to form his own faction known as The Banished. 343 confirmed that Atriox is a “long-term enemy”, so get used to the sight of his bearded mug, because it’s here to stay. 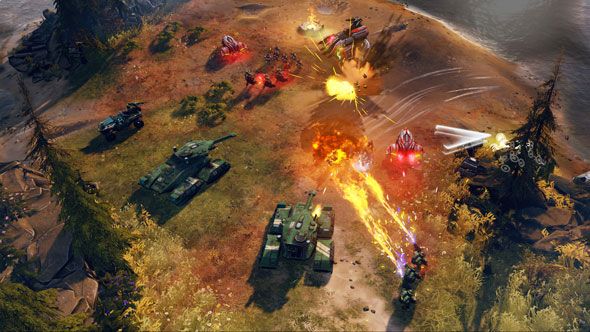 It’s a classic ‘last hurrah’ narrative, where Cpt. Cutter, returning from the first game, and the crew aboard his Spirit of Fire ship are now war-rusty and over the hill. Even their new AI Isabel has little faith in their chances of winning; Rocky making a comeback in Rocky Balboa, sclerotic Batman taking on Superman in The Dark Knight Returns, me taking up five-a-side football after not playing for four years… you get the idea. It works.

Once I jumped into the action, there was little dialogue to bridge the gameplay with the plot. Starting with a couple of squads of Marines led by a Spartan, I began amassing the scattered troops at a science facility beset by The Banished. After a couple of introductory skirmishes, I established my first base in a preset location, around which I could slot up to six structures that generate Energy, Resources, or troops, as well as turrets in preset places. For people using gamepads, I can understand the use of such a regimented way of building, though it doesn’t leave too much to the tactical imagination and feels a little restrictive on keyboard and mouse. Preset base locations can work in an RTS, but here they felt lacking in strategic value. Except for a few bunkers and sentry towers dotted about, there was little here to cater for any kind of thoughtful defensive play. 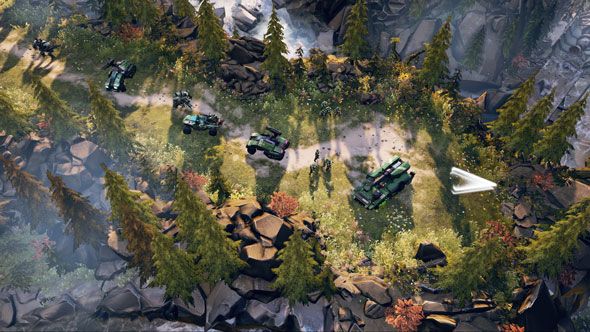 But then they do say that the best form of defence is attack, so I sought satisfaction by taking it to the enemy (after spending five minutes patiently upgrading my base to become a big old battery farm of military production). My 60-strong army was made up of about 30 marines, 20 flamethrowing Hellbringers, and a couple of Warthogs (yes, that does add up to 60 – don’t question it). Just as in the original Halo Wars, there are no formations, or tactical options to combine two different unit types, so most of my actual real-time strategizing would take place in the heat of battle. Once I collided with The Banished, I frantically clicked away to make sure that each of my units was attacking and avoiding the right enemies in the explosive game of rock, paper, scissors – Hellbringers beat Infantry, Infantry grenade defensive structures, which in turn are resistant to vehicles, and so on. I’d also watch keep a close eye my units’ special ability buttons, making sure I used them the second they refreshed so that my marines can lob grenades into packs of hunkered-down enemies, or so my Warthog can ‘ram’ enemy infantry, toppling them like bowling pins. 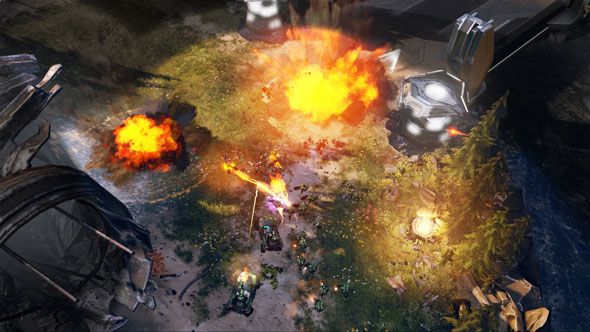 Using the above tactics, I marched in a somewhat ramshackle mass on The Banished stronghold. I steamrolled the enemy without much micromanagement (to be expected in an early mission), though the scale of the battle gave me a chance to sit back and appreciate some of the pretty visuals on display. Flamethrowers spurt fine streams of fire that upon contact expand into violent blazing mushrooms lined with noxious black smoke, rockets leave convincing smoke trails in their wake, while destroying Banished buildings gives off otherwordly purple fires and energy emissions. There’s not too much to say by way of character or building designs, or the aesthetic of the fairly generic levels as a whole, but once the action kicks off, it all looks rather lovely.

With a strategy game, acoustic details like music, sound effects and dialogue between characters tend to compensate for a lack of proximity to the action. 343 went to laudible lengths on this front, renting a whole load of WWII tanks, guns, rockets and flamethrowers, and capturing the original weapon noises before engineering them to sound more futuristic (while still retaining a sense of familiar, crunchy realism). 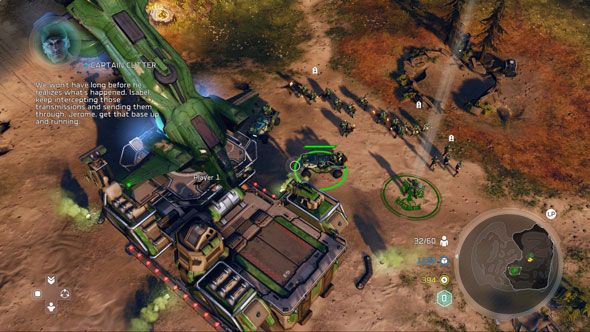 Would my tone-deaf self have noticed that the Scorpion actually sounds like a Sherman Tank, or that the flamethrower is based on a real one rather than computer-made sound? Nope, especially as during battle there’s such a cacophony going on that it all just sounds like metal, death and miscellaneous futuristic war. But it’s nice to know that the devs care enough to create these bespoke details that are likely to only be registered subconsciously.

The orchestral score and dialogue fluctuate between four stages of severity depending on how the battle’s going. So if you’re kicking back and watching your resources pile up while your troops play British Bulldog outside your base (that’s what soldiers do in their downtime, right?), then the music stays ambient. Then it steadily becomes more intense as the action picks up, to that point that if your base is going up in flames and you just have one last brave unit of Hellraisers (with authentic-sounding flamethrowers, no less) left, they’ll yell in defiant desperation as the music amps up the horns and bassoons to herald their imminent demise. 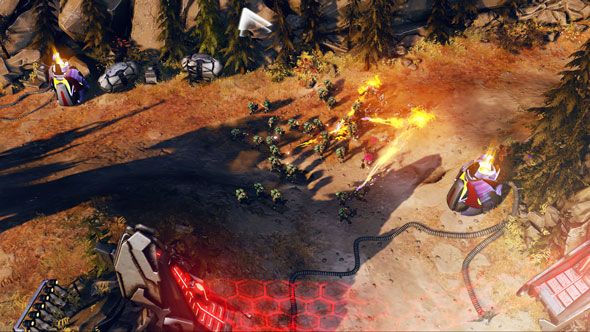 Where Halo Wars 2 really got my attention was the previously unrevealed Blitz mode. Shaking up the game’s otherwise conventional RTS formula, Blitz replaces base-building and resource-harvesting with cards and energy drops around the battlefield. You pick one of six leaders, each with their unique abilities that you can summon forth like some transcendent MOBA hero. After that, you pick a deck of 12 cards that will make up the units and special abilities you can use during battle. During play however, you can only have four cards in your hand at once, and need to spend precious energy each time you want to shuffle one out for another in your deck. The match rules are the usual ‘domination mode’ rules, where you wrestle with the enemy team for control of several capture points on the map.

Turning Halo Wars 2 into this hybrid RTS-card game overhauls the nature of battles – and I think for the better. True to the name, Blitz games are extremely fast-paced, and have something of the eSports about them with their synthetic, open arenas and goofy announcer bolstering the mode’s heightened sense of gameification. At first it feels frantic as you try to outmuscle your enemies by spawning more troops into battle than them, but after a couple of matches you realise it’s really about quick-thinking strategies, understanding which units do what, and knowing when to take a gamble. Should you play it safe and throw in a couple of Scorpion tanks to try and swing a skirmish your way, or do you shuffle a card out in the faint hope that you get a Legendary ability like the MAC strike, which is almost certain to decimate the enemy in its entirety? 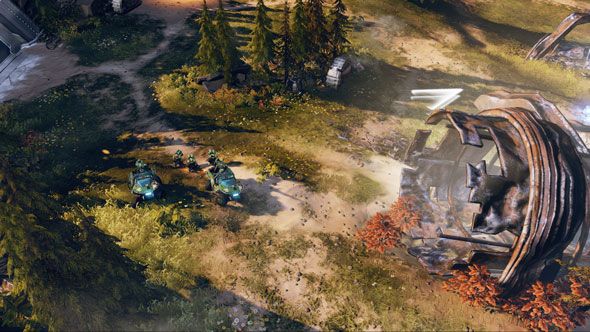 There’s less unit management in Blitz than in the main campaign. The importance of any micro-actions you take with your troops during battle is dwarfed by the impact of bringing in the right cards to counteract your enemy’s forces, or by what your troops are doing in other parts of the battlefield. You should always have a couple of units (Warthogs, in my case), on standby near where energy drops spawn, for example. Or you could have a strikeforce of aerial units hovering over some inaccessible terrain, ready to pounce on smaller ground forces trying to sneak in on an undefended capture point (if the enemy force is too big for your aerial units to handle, then – like any unit – they act as mobile spawn points so you can instantly reinforce them if you have the energy to do so.

The beauty of Blitz is that it doesn’t feel confined by the tight rules of the main game. It removes the rigid, restrictive bases and forces you to be active in every area – from gathering energy, to spawning units in the heat of battle, to making tough, savvy card plays that can change the course of a skirmish much more dramatically than anything I saw in my (admittedly limited) experience of the Campaign. The devs talked about how there are less ‘plates to spin’ in Blitz mode – leaning it towards the more focused MOBA end of the RTS scale. But you’re going to have to learn to spin said plates pretty damn fast, and learn to be creative about it, because there’s a whole load of room for improvisation.

While the presentation and story of Halo Wars 2 should reassure fans that 343 and Creative Assembly clearly care about the beloved franchise, an uninvested, detached PC gamer like myself found little novelty in the couple of Campaign missions that I played. Obviously, the epic battles and other spectacular stuff will no doubt come later into it, but with the RTS-Lite levels of tactical depth I saw (few upgrades, no formations, little base management), I question based on this whether people other than Halo fans will feel compelled to see the Campaign through.

But that might not be too much of a problem, because in Blitz 343 and Creative Assembly have (fittingly) a trump card that has echoes of the League of Legends/Rocket League paradigm – easy to pick up and play in short bursts, while having a sky-high skill ceiling that could attract the hardcore crowd. On the PC, Halo Wars 2 might well become a game of two distinct demographics – Halo fans compelled to follow the promising Campaign plot, and gamers looking for a fast-paced, eSporty experience in the Blitz mode. Tradition and fan service on the one hand, and a new, card-based way of RTSing on the other (with the slightest hint of a MOBA thrown in) – Halo Wars 2 is shaping up to be very a strange beast indeed.