How Halo Wars 2 exists, I honestly don’t know. You wouldn’t think that 2017 –  a decade and change since RTS classics like Command & Conquer, StarCraft and Age of Empires ruled supreme – was the ideal time for a sequel to a Halo strategy spin-off. Hell, even the original Halo Wars proved to be developers Ensemble Studios’ final game – a Spartan nail in a coffin destined to at some point be nailed shut. Somehow though, by some miraculous boardroom decision, Microsoft have crowbarred the casket back open and tasked Creative Assembly with resurrecting Halo Wars.

In the publisher’s defence, putting the sequel in Assembly’s hands is not bad move; the Total War makers have a storied history with the strategy genre, and anything they touch seems to be a hit with the PC audience. But this still doesn’t explain Halo Wars 2’s bizarre timing. To make things stranger, it’s clear that Halo Wars 2 is aimed squarely at console players rather than a hardcore PC fanbase. Therefore, heed my warning: if you want a comprehensively deep, challenging strategy experience, Halo Wars 2 is not going to be for you.

Instead, come to Halo Wars 2 if you want a top-down real-time game that’s enjoyable, pretty and suitably Halo-y, but decidedly simple. The simplification is clearly by design, but it has a drastic effect on how the game plays. Rather than being truly thoughtful, Halo Wars 2 just about succeeds by being pretty good fun, explosive and colourful. The majority of its time is spent concentrating on what it’s best at: the Halo stuff. 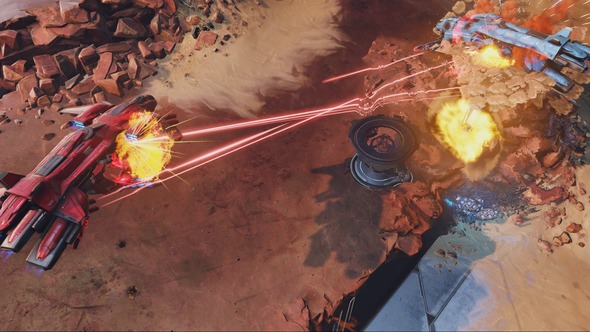 It succeeds there. The game is not only gorgeous, with all the bright effects that make Halo so distinct, it also gets the sights and sounds perfectly right. Set almost three decades after Halo Wars and just after the events of Halo 5: Guardians, Halo Wars 2 continues the story of the Spirit of Fire, a UNSC capital ship in deep space. After emerging from a 28-year long cryo-sleep, the Fire’s crew find themselves battling against a splinter faction of the Covenant known as The Banished. This fearsome group, lead by the unbelievably badass Atriox, is so powerful that even the combined power of the Covenant could not defeat it. So, obviously, you and your team of humans and genetically engineered Spartans have to battle them on distant worlds, fighting it out in Halo’s trademark vibrant forests in order to take them down once and for all.

Across its 13 individual campaign missions Halo Wars 2 doesn’t tell a particularly original story, but credit to Creative Assembly and Halo stalwarts 343 Industries for coming up with an opposing force that feels truly menacing. From their first appearance in the opening mission, The Banished exude danger and ferocity, and the game’s cut scenes, created by returning CGI studio, Blur, look amazing. They do a decent job of delivering the story’s key beats with a wonderful attention to detail, but they do end up feeling a bit disjointed from the in-game cutscenes. The result is a story that looks the part, but doesn’t resonate as strongly as the Halo shooters’ best plot arcs.

The game’s at its greatest when it half sacks off the traditional RTS ideas and instead pursues a more action-packed structure. I far preferred the game’s levels that felt more like set-pieces ripped straight from the Master Chief’s own adventures, rather than the ones where you were building a base and assaulting key points on the map. That might feel silly considering what Halo Wars 2 is, but the former levels feel much more exciting. The first level puts you in a Warthog escape from the recently discovered Banished forces, for example, while one a little later has you playing a lone Spartan as she tries to save a bunch of soldiers and fend off against a ton of Covenant forces. Then you get to stomp around in one of the huge Scarabs, which is immense fun. The game might lose depth in tailoring itself to a console audience, but in moments like this it finds its own identity.

Elsewhere, when it does revert to more standard RTS tropes, you’ll find that Halo Wars 2’s keep-it-simple-stupid approach to strategy ends up feeling somewhat lacking. The game retains the original’s approach to building and resources, with handful of upgradeable modes that you can tack onto your base HQ, and with only two types of resources – energy and supplies – it’s easy to know how to make more dough to build up your armies. The problem being that you’re rarely left thinking much beyond ‘Oh damn, I need some more of the blue stuff’. Or ‘I have run out of the yellow!’ 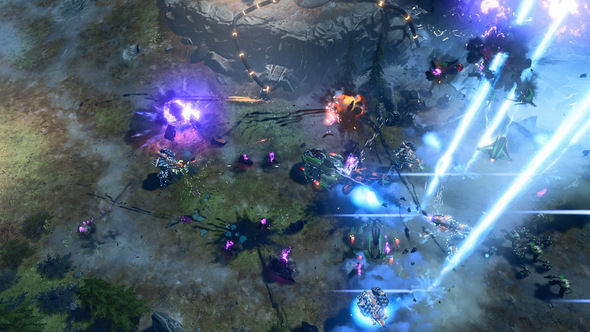 This lack of thought is further highlighted by the controls, too. Halo Wars 2’s keyboard implementation just isn’t that great, so I preferred playing with a controller. That’s not an issue because the control scheme is superbly implemented on an Xbox One controller – press RB once to select all units on screen, double-tap it to select all units on the map, or hold A and you’ll select a number of units within a circle select – but you’ll quickly find out how little finesse is really required in order to win. Every unit attacks with X, but some, like the amazing Spartans, have special moves you use by pressing Y. Warthogs will do a super powerful ram boost, while the Spartans can either do a brilliant power jump before slamming to earth, or can hop onto enemy tanks and commandeer them.

You can create and manage individual squads on the field, but I never felt particularly compelled to do that. Tapping and double-tapping RB was perfectly adequate for most of the entire campaign, partly because the levels aren’t that tough, and half because your objectives rarely require you to divide and conquer, so directing individual fire teams just never feels that necessary. It’s a case of just creating a ton of troops and letting them all loose at once. Strength in numbers is the name of the game in Halo Wars 2, rather than tactical positioning. 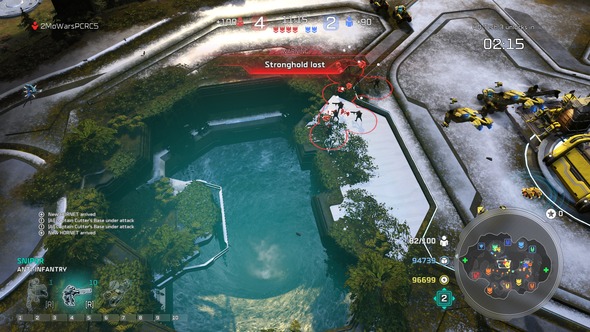 The game’s strategic possibilities expand a bit in multiplayer – just – but not enough to cement Halo Wars 2 a place in the annals of RTS multiplayer history. Your biggest decision will be which leader powers you choose, giving you unique abilities (aerial strikes, mines and such) that’ll help massively in any given battle, and you do get the chance to play as the Banished, but that’s the extent of the differentiation. You’ll begin to see the same patterns forming and strategies being employed in multiplayer the more you play, and I quite quickly became pretty disinterested. Skirmish was similarly fun for a short while, but at least with the single player battles against AI I could play on my own time. It’s also worth noting that I regularly had some horrible judder while playing online, and I’m fairly sure it had nothing to do with my internet connection.

By far the game’s most interesting and innovative addition is Blitz – a mode that sacks off the base-building framework and creates something unique. By removing the static bases and adding a dynamic deck-building structure in its place, Blitz follows in the footsteps of Civilization VI and makes unit creation an immediate solution on the map, but one that costs you precious resources that can’t be farmed at a base. Instead, you have to scour the map for drop pods which hurtle down from space and can be blown up to grab resources from within them. This creates a much faster-paced and more dynamic experience than anything else Halo Wars 2 offers. It’s vital to be mobile in order to win. 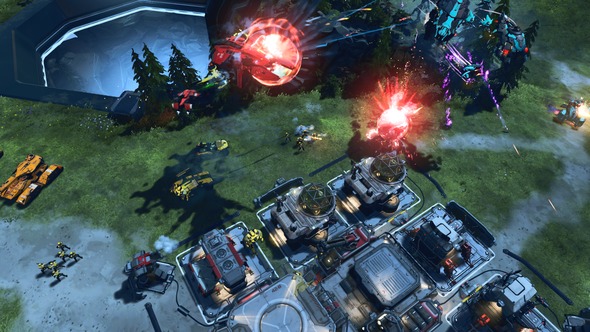 In single player, Blitz is just as great. It gets harder and harder as the waves of enemies gets larger and more powerful, so you’ll have to think quicker, divvying up your squads to hold the map while also destroying the drop pods. The only real criticism I have of it is that I don’t really care about putting decks together outside of the matches themselves, so the card micromanagement side of Blitz proved a turnoff for me.

I like bits of Halo Wars 2 quite a lot, but it’s often hampered by its need to simplify. If the lavish Halo production values are enough for you to get excited, then Halo Wars 2 will give you a hell of a time, but if you’re after something with true transformative depth, this is not the game you need. For me, I was halfway in the middle – the game had enough to get me in and keep me engrossed for a short time, but aside from Blitz there isn’t enough to guarantee I’ll come back in the way I did with its forebear. Less of a second coming, then, and more of a temporary CGI-Tupac revival.