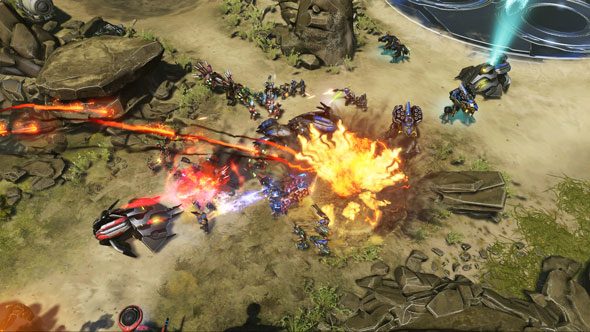 The situation looks desperate. My teammate’s rebuilding his currently non-existent army back at the main base, and mine is on the verge of being obliterated from the last of the three capture points on the map. We’re on the brink of being at the wrong end of Total Domination, in the game’s words – or total humiliation, in mine. My zippy Warthog buggy is in a distant corner of the map trying to harvest some precious energy so I can spawn something – anything – useful using my hand of cards, but there’s nothing there that looks like it could be a game-changer.

Related: take a peek at some of PCGN’s most beloved strategy games.

With nothing to lose, I spend 50 energy to shuffle one of my cards in the hope of it being a Legendary. It isn’t. I shuffle again, knowing that this could be my last shuffle as my battalion of brave, hapless Hellbringers looks set to fall. It’s a Legendary! I select it, spending my remaining 300 energy points to beam a colossal gunship into existence over my Last Stand, raining a hell of rockets and laser-thingies down on those bastard red-and-yellows. Wisely, they retreat, and I regain control of the checkpoint while my teammate’s rebuilt army comes to reinforce me. The game goes on.

The poetic thing to have happened next would’ve been for me and my buddy to heroically win the match; we didn’t (sorry), but the rush of reversing a seemingly doomed battle using the bizarre, brilliant card mechanics in the new Blitz mode of Halo Wars 2 was something special, and could mark a interesting new direction for the RTS genre.

But let’s rewind, and explain why the hell playing cards have found their way into a real-time strategy game.

Blitz mode sees two teams of one to two players each battling it out for control of capture points on large plain maps. These points take the form of vast circles on the ground, with no bases, no cover, no nothing to strategically position your troops in. It’s essentially a domination mode type – control more of the areas for longer than your opponent, and you win. There’s also a Blitz Firefight mode, which has the same rules except that you play cooperatively with a buddy against growing waves of AI enemies. 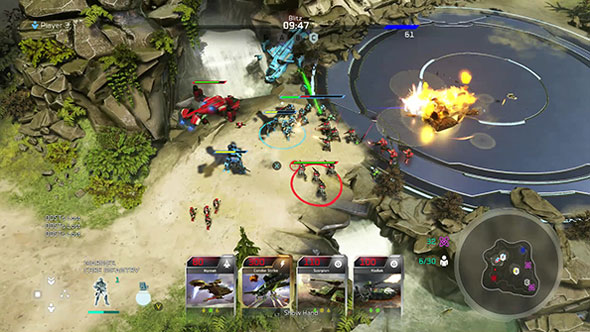 So far, so Battlefield/Horde/a thousand games that came before. But what makes Blitz special is that all army-building and tactics stem from playing cards. Before each battle, you select one of six leaders (each with their unique, card-activated abilities), then a deck of 12 cards, which represent the units and abilities that’ll be available to you in battle. During play, you have four of these cards in your hand at any one time, and using Energy (which intermittently drops around the map throughout the battles) can summon them to wherever you have at least one unit on the battlefield. You literally beam armies and powers in from the heavens as and when you need them – subject to your energy supply and cards you have in your hand at that moment. Crucially, you can shuffle individual cards out and bring others from your deck in at a cost of some energy, giving a gambling edge to proceedings.

We’ve seen similar stuff before in EA’s ambitious but flawed RTS/card game hybrid BattleForge, but here it’s implemented in a much speedier, more sporty fashion. Blitz isn’t defined by who builds their base fastest and storms their opponent, nor is it about unit management and positioning in the way that the campaign and standard multiplayer modes are. The Blitz maps are arenas – vast, plain, distinctly gamey – and once armies collide you’ll have a hard time micro-managing your troops in any way. Instead, it’s about shocking your enemy by dropping in a pair of the formidable Vulture ships right behind them as they’re gaining an edge on you, or smuggling a couple of units out of a losing skirmish so you still have that precious moving spawn point on which to rebuild your army. It’s a game of immediacy, big instant decisions, and deceptively deep strategy. 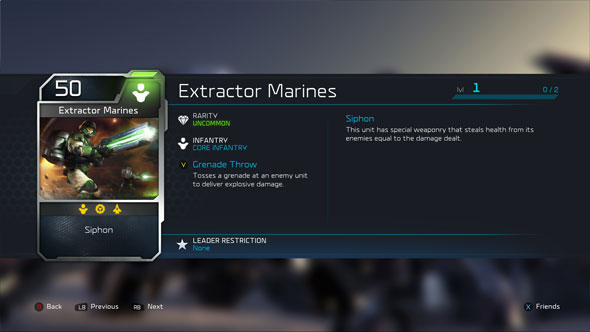 Blitz is the brainchild of Creative Assembly’s Oli Smith and 343 Industries’ Max Szlagor. When I asked how the whole card thing came about, they said that in search of a new twist on the genre that would offer a speedy, accessible and “less intimidating” experience, they considered a card-based army picker before the battles, a bit like a table-top game of Warhammer. Smith told me, “The big Eureka moment for us was when we thought ‘Ok, you’ve got cards to build an army, but how about going one further and using these cards on the battlefield?’”

With its five to ten-minute matches, special Commander abilities, and ever-present possibility of battles being dramatically turned on their head with a lucky hand and some quick thinking, Blitz for me has echoes of a MOBA about it (something which has also been alluded to by other members of the Halo Wars 2 dev team, including Creative Assembly executive producer David Nicholson and 343 Industries’ head of strategy games, Dan Ayoub). It feels designed for the gamer who’s time-constrained in the short term, while at the same time opening the proverbial skill ceiling out to the sky, which invests players in the long-term. It’s a fascinating formula that I’d never have expected from the simple, console RTS framework of Halo Wars. Now I’ve played it, Blitz feels like a better mechanical fit for Halo Wars 2 than the traditional base-building style of its main campaign. 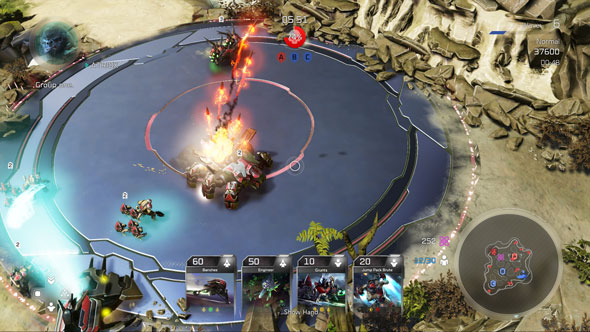 Smith is less attracted to the MOBA comparisons than some of his peers, though acknowledges that Blitz was similarly about taking one element of the RTS and honing in on it. “MOBAs condensed the RTS to the point where you basically took control of one unit”, he said. “We also wanted to condense it, but instead of doing the MOBA ‘fine dexterity’ stuff, we wanted to do something big and bold. That’s where the cards come in. Playing a card should be the most influential move you can make in a game – not so much the controls afterwards.”

My first few rounds of Blitz were messy; looking at the ever-crucial mini-map (with no fog of war, negating the need for scouting and searching), I’d see giant ragtag blobs of each player’s armies moving menacingly but primitively from one capture point to the next, expanding each time someone happened upon an Energy drop. When skirmishes happened, it’d just be a case of the bigger force winning. But after a few matches, there were signs of fledgling strategies forming. Speedy Warthogs would be split off from larger armies to collect energy drops, Vulture squadrons would hover over central parts of the map inaccessible to ground troops, ready to offer support where needed, and armies would be split into at least two, with smaller squads of units standing at strategic points to act as walking spawn points. 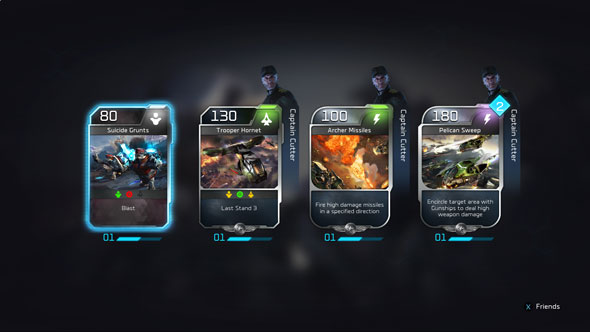 I once managed to bait an enemy ground force of marines, a couple of Scorpion tanks and some of the mechanised Cyclops units to attack a relatively small force of mine that was holding onto a capture point. But what they didn’t know was that I had saved up for a MAC Blast, which decimated the force when it came for what it thought would be easy pickings. As they retreated, I summoned a couple of the drone-like Hornets to fly over the mountains (most aerial units can fly over impassable terrain) and intercept them, diminishing their numbers before flying back to the secured capture point.

Smith tells me about a match between some of the devs where a fleet of Vultures was descending on the last remaining capture point of a player whose army was all but finished. Or at least that’s how it looked; what really happened was that the player had saved up a ton of energy to be able to quickly shuffle through his cards and build up a force of cheap but powerful anti-air units, which spawned in a matter of seconds and blew the Vultures out of the sky in a scene that must’ve looked a load of futuristic Hindenburg airships plummeting ablaze to the ground.

Another strategy they discovered was to place individual Kodiak artillery tanks at key points on the map so they could fire their shells over mountains and other inaccessible areas of the map to barrage energy capsules as they appeared, speeding up the work for the units picking them up. Perhaps not as ‘epic’ or dramatic as other Blitz tales, but still an indicator of the kinds of tactical improvisation and creative thinking that the mode encourages. 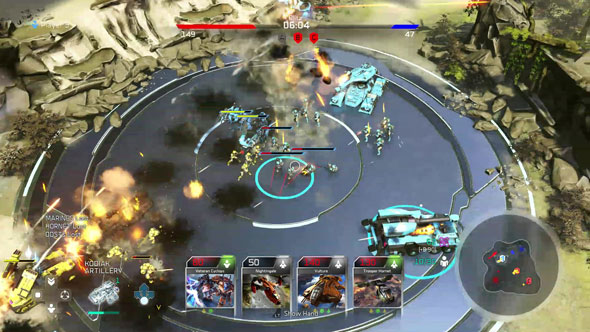 War-fatigued after a suffering a couple of heavy defeats, I peered over other players’ shoulders, observing as each player began to take on unique play-styles and approaches to battles. Obviously, everyone’s skills were rudimentary at this point, and yet the watchability, pace and potential depth of Blitz mode strikes me as distinctly eSporty.

While Smith prefaces that eSports can’t be forced on people and need to evolve organically through the community, he’s excited at the prospect. “We really wanted to make a more sports-like atmosphere in Blitz. In Halo 2, I loved the primary-coloured maps and all the crazy stuff happening,” he said. “What’s really exciting about Blitz is that it’s easy to follow – for people to see the reversals, the last-minute comebacks, and just ‘get it’.” Does he see Halo Wars 2 as becoming a potential eSport then? “If people feel passionately about Blitz, then they could take it to the competitive scene. Certainly I’d be very happy if they wanted to go down that route”. 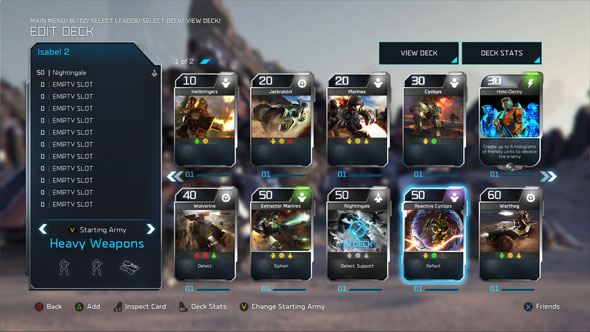 It’s too early to judge whether the Blitz mode of Halo Wars 2 is the next big thing in strategy games, or in eSports, or whether it could go on to break away from the main game and become its own entity like a certain little game called Dota, but the manifest possibility of these things happening makes Blitz feel like a simmering pot of potential.

As a PC gamer who’s neither a Halo diehard, nor exactly starved of good RTS options, the main Campaign and standard multiplayer modes in Halo Wars 2 strike me as more of the same (which will probably be enough for fans of the original). But in Blitz, 343 Industries and Creative Assembly have are offering a curious slant on the RTS – they may be onto something here. It’ll be fascinating to see how more strategy-savvy gamers than myself take to Blitz when the time comes.