Dishonored was all about revenge, or justice, I think. It’s been a while since I’ve thought about it. It was a game about a man, Corvo, who was so angry that he literally couldn’t speak, so instead he expressed his feelings by stabbing men and throwing them off ledges, which is probably healthier than bottling them up. The feelings I mean, not the men.

In The Knife of Dunwall however you play as Daud, tangential antagonist of the original game, who is tormented by remorse having prostituted himself to the Lord Regent by assassinating the Empress of Dunwall, thereby triggering the events of Dishonored. Daud talks a lot. Daud has a flapping tongue and a ticking brain, which makes this DLC feel altogether different in contrast to the unsettling silence of the original. It feels chattier, Daud feels more like Garrett, so the game feels more like Thief.

In the hour I played, new star Daud is in search of The Delilah, a whaling ship that he believes to be key to his personal redemption having done a big regrettable stabbing on a lady. The Outsider gives him this initial clue, as he is for whatever reason concerned with leading Daud out of this self-destructive, introspective phase and turning his existential frown upside-down.

Armed with the name of a boat Daud sets off to a slaughterhouse to confront the vessel’s owner and interrogate up a storm of answers. He does this with the assistance of his “number two” (who’s not a big walking poo, but rather a high-ranking, trusted and well-informed member of Daud’s cabal of assassins). She appears at various points throughout the mission to clue Daud in on the features of the slaughterhouse and the odd circumstances the establishment has found itself in: namely that workers are striking, management is cruelly locking up dissenters, guards are cracking skulls and scabs are still busily hacking up blubber and pumping oil out of carefully strung-up whales. 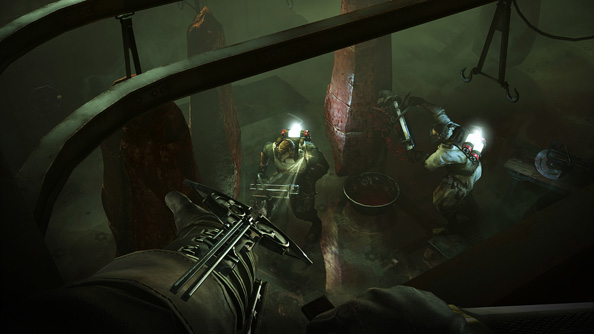 Immediately this feels every bit a Dishonored mission pack: you can take multiple routes along a cobbled road leading to the slaughterhouse, electricity pylons incinerate you if you get too close, archways are blocked by the same giant, lethally zapping forcefields Corvo had to contend with. There’s canned food and books everywhere.

Daud has a different set of abilities however. He can summon an assassin buddy to fight on his behalf, he wields a wrist-mounted mini-crossbow with sleep-dart and stab-you-in-the-neck functionality. His own Blink teleportation move also freezes time while your destination is being chosen, which more easily allows for that classy mid-fight trick of vanishing into an enemy’s blind spot before ambushing them from behind. 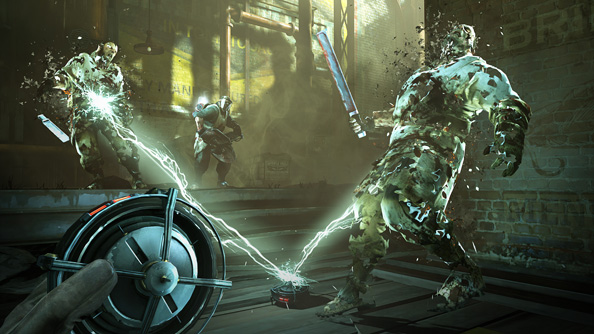 Otherwise, while there’s no more polymorphing into rats and fish, you’ll come across new Arc Mines, pressure-sensitive, incinerating electrical ordinance that will turn two nearby enemies into ash when stepped on. I found some of these in a makeshift prison yard outside of the slaughterhouse’s main slaughtering-building — they’re essentially reskinned Spring Razors capable of murdering exactly twice as many bad guys in one go.

Entrance to the slaughterhouse can be achieved either by retrieving a timecard from one of the imprisoned workers, worming your way in through an exhaust pipe full of whale kidneys or shimmying up a dangling chain around the building’s side. Inside you’ll encounter a sight that puts the original Dishonored’s grimmest tableaus to shame: an enormous whale, still alive and moaning pathetically, gutted from sternum to tail and dripping its precious ichor through a bloody grid piled high with glossy, purple viscera. The unseen beasts of the original game are rendered close-up and in grotesque detail here, and you’re given the choice to end its gruesome suffering by delivering a fatal, final voltage to the creature. Ironically, you’ll do this by retrieving and plugging in two containers of the very oil being extracted from the beast. 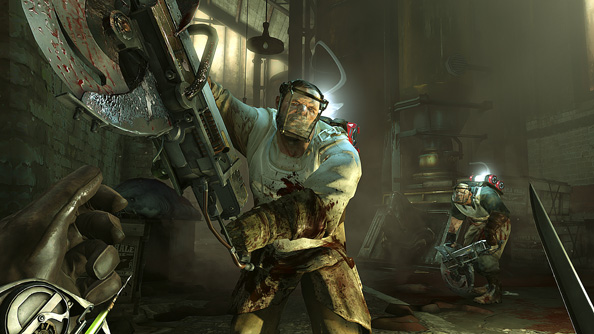 Euthanising the whale forces you to deal with the few workers left inside the building: buzz-saw wielding butchers who’ll happily take a break from shaving up blubber on the killing floor to give Daud more than just his bruised conscience to worry about. The melee scrapping is enhanced by the character’s ability to freeze time and teleport with a single click, though it’s weirdly temperamental. Often, probably depending on how much mana you’ve got left, you’ll find time randomly unfreezes as you choose which ledge to zip to. There’s a knack to using Daud’s imperfect abilities that comes with practice. Helpfully, as you upgrade your own skills, you can also upgrade those of the assassins you call into battle alongside you, allowing them to move at normal speed when you slow time, or to fire their own wrist-mounted bolts.

Tracking down Rothwild triggers the typical Dishonored choice-platter between assassinating the man or gifting him a fate worse than a floppy ragdoll animation. Here, the non-lethal option was to pop his unconscious form in a cargo crate and have him shipped off to the ends of the world after you’d extracted all you needed to know (which, depending on where he ends up, could actually be quite pleasant). You’ll also meet the woman responsible for triggering the strike action, who showers you in secondary objectives to open pressure valves and destroy the whale-slaughtering operation. Where Dishonored had you collecting mini-missions from colleagues back at home base, Daud instead purchases most of his clues from his guild at the beginning of each mission, inciting his assassins to leave safe combinations and other treats littered around each level in return for gold. 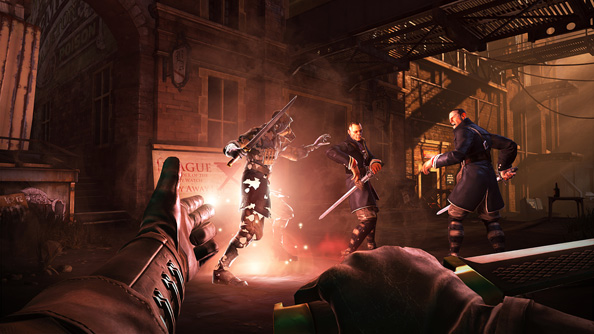 The simple addition of Daud’s vocal cords is what makes Knife of Dunwall really feel vibrant, colourful and rich. Here’s a man wracked by a very specific kind of guilt, but also one so versed in murder that he’ll slice through vertebrae without flinching. That sort of attitude strips away the ambiguity of Corvo’s mute-brained character and lathers this DLC in a sort of suave killer-charm. Knife of Dunwall also brings that wonderful sense of multi-perspective storytelling most notably seen in Half-Life expansions Blue Shift and Opposing Force. Daud’s story runs concurrently alongside Corvo’s, you’ll hear of his exploits, maybe even see him jumping about in the distance from time to time. Disappointingly, the player doesn’t get to enact the very assassination that triggers Corvo’s mission, that happens in a cutscene, though you’d hope such freedom is offered in an interesting way on the occasion when both characters’ story arcs once again converge at Daud’s base.

Maybe. Who knows? This DLC is good though, and if you like Dishonored then this will please you also, as it ducks into Dunwall’s rich vat of fiction and comes out stinking of whale oil and politics. Oh, and in one magical, self-referential, fourth-wall breaking moment, you’ll even overhear a guard saying “Whiskey and cigars, do you even think about anything else?”