Nosgoth was going to be what happened when you clicked the ‘play multiplayer’ button in a Legacy of Kain game that never got made. It’s the multiplayer hubcap that’s popped off its singleplayer wheel mid-skid and rolled safely down a hill while the rest of the car went around a sharp developmental bend, flipped over and exploded into a billion cancelled pieces. It’s Daffy Duck’s multiplayer beak, wrapped around the back of his singleplayer head after taking a shotgun blast to the face.

It’s an asymmetrical, free to play, vampires versus humans, third-person fighting game. Here are some words about it.

Battles take place in famous Nosgothian locations such as “a town” and “sort of a fishing village” and “temple ruins, I think” between two warring races, the dominating vampires and the revolting humans. They’re different in many ways, these humans and vampires. The latter can suck blood from corpses to regenerate health while the former gets a nice bow and arrow. The latter can fly around the battlefield picking up humans and dropping them on their heads, the former can throw a light grenade to temporarily blind vampires. The latter can climb over buildings and rooftops and pounce huge distances to pin humans to the floor in a savage, brutal and entirely unpredictable attack, the former has a little altar they can stand in front of if they want more hitpoints. 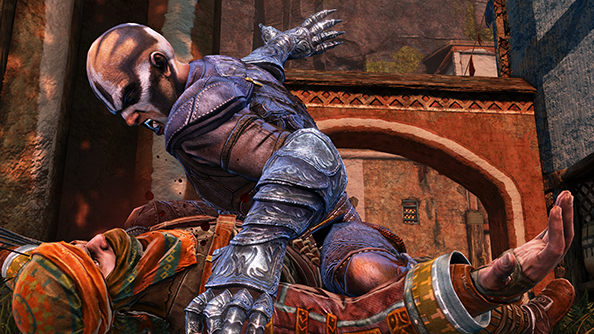 So you’ve got some asymmetry, to say the least. Humans are armed with weapons that allow them to attack vampires from a distance, while vampires more or less have to get up close to their enemy before they can inflict any damage. That difference gives rise to a ranged versus melee dynamic that drives much of the combat in Nosgoth, and while you can choose to play as any class within the human or vampire ranks, at half time both sides must swap over and play as their counterpart. That is to say, you play as humans for one round and vampires for the other, which is a cheeky shortcut to balance in any asymmetric multiplayer game.

In practice (with inexperienced players, it should be said) encounters tended to be won by whichever team outnumbered the other. Two vampires will beat one human. Two humans will beat one vampire. Skill and ability was often secondary to numbers and chance. Playing as a human, attacks seemed to only ever have a whittling effect on enemy hitpoints, grinding down their health by keeping the crosshair over them until the finally ragdolled to the floor. There are no headshots or opportunities for a skillful shot to inflict a punchy amount of damange, unless such a system been entirely obfuscated, and so the weapons with which the humans are armed — a crossbow, a regular bow and a hand-cannon — feel feeble. Which is frustrating when vampires are scooting towards you. 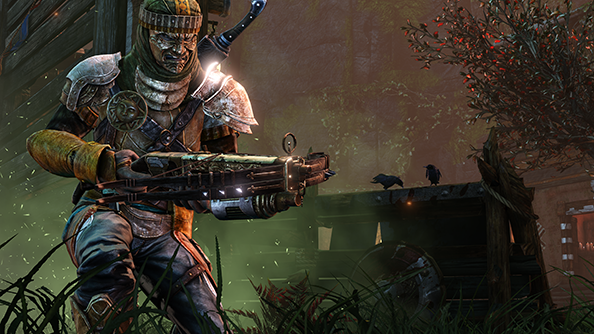 Some of that puny firepower can be mitigated by teaming up with other humans, but other than combined output there’s little reason to consort with other players. There are no interacting abilities in the current closed beta build, no medic class or buffs or debuffs or skills that complement anything that other players are doing. The grenadier class of human has a health grenade, but that’s where co-operation starts and finishes. Soon to be introduced classes such as Nosgoth’s take on Team Fortress 2’s spy as well as a buff-doling blood mage human could go a long way to promoting interoperative use of skills and powers, but as it stands there’s little to shout at teammates beyond “I’ve just seen a vampire over there”, and that’s only because the maps are too big for four versus four.

Playing as vampires, this sense of tactical isolation makes a little more sense. You’re more powerful, able to climb up walls by holding down the shift key and running towards them. The three classes of vampire are a little more diverse too, including a hulked out tank character, a nimble and pouncy hunter character and a winged sentinel character capable of flying above the map. The problem of feeble attacks is especially pronounced with the sentinel, the flying vampire, whose main attack while flying is his ability to pick a human off the ground, fly skywards and drop them. This won’t kill a healthy human, but instead deplete a chunk of their hitpoints, which is useless to the vampire who’s since soared off in the opposite direction, unable to relocate and finish off his prey. Instead, landing and using lunge attacks becomes the best option. While flying, the best you’re capable of is pestering human players. You should be a god. 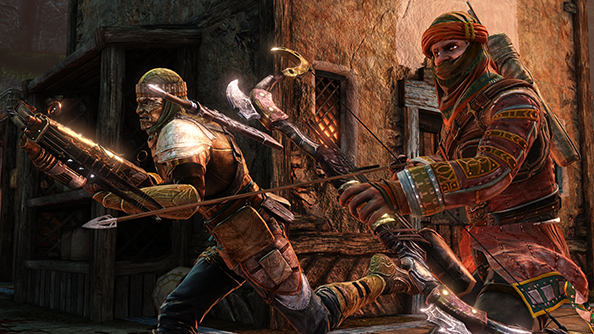 That ability to climb walls and fly has been toxic to the level design too, resulting in boxy and ugly maps filled with invisible walls and pointless, thoughtlessly placed alleyways. The dynamic of vampire abilities versus human abilities, all of those strengths and weaknesses, just hasn’t filtered into the design process of the maps, leaving them feeling primitive and unrefined. Nosgoth is all rough edges and brown, bad animations and forgettable looks. There’s little compelling about this free to play title in its current form, but development continues and improvements are being made.

Nosgoth is in closed beta, so there’s scope for it to shape up. Diving into an unexplored chunk of Legacy of Kain lore is an intriguing premise for fans at least. And the pitching of the rarely seen humans against the focal pointy tooted fannies is a clever idea that should lead to more interesting classes and abilities being introduced along the way. Right now however, this feels like a disembodied multiplayer game with an dull as balls cast, one that would’ve been blithely dismissed as average had it actually been appended to a new Legacy of Kain title.

That said, Fraser holds an entirely opposite opinion, and while nobody is suggesting he’s completely wrong you do have to question the motives of a man who shares his name with a television show. You can read his Nosgoth previewhere.