XCOM is getting new bad men. Snappily dressed bad men. Bad men in waistcoats with slicked back hair and nice trousers. Bad men who look a little bit like the good men from XCOM: The Bureau, but who I am assured are only sartorially similar by coincidence. The new bad men are Exalt (or maybe EXALT: EXcellent And Lovely Trousers), a human group of alien sympathisers who, should you decide to install the new XCOM: Enemy Within DLC, will crop up to scuttle your anti-invasion attempts. Here’s how!

Rather than existing as a single entity, Exalt are a sort of terrorist coalition made up of a network of undercover cells. Fictionally speaking they’re everyday folk with regular jobs, who one day pick up the telephone, don a pair of suspenders and start mucking up some XCOM operations. Exalt are everywhere, spread across nations like an alien-fancying Anonymous — except these guys can rock a fedora — and uncovering their base of operations requires retrieving clues by tackling individual cells. 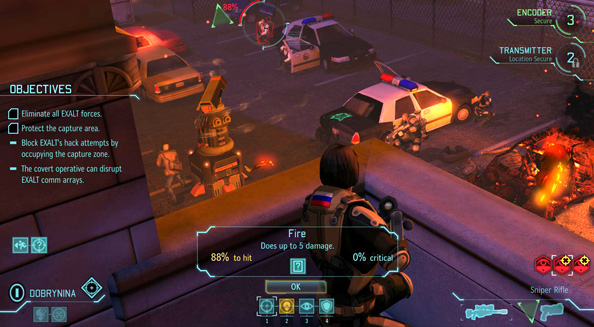 Passively, Exalt will muck about in council nations, disrupting your production and draining your funds as long as they’re at full strength. By spending cash on intel you can reveal a cell location and from there you can insert a covert operative of your choice to have retrieve data. After a few days, this operative will radio back to mission control requesting an extraction. It’s then that you enter into conflict with Exalt forces in one of two types of mission.

The first places your XCOM squad on one side of the map, and your covert ops man or woman on the other. A number of hackable nodes exist on the map (precisely two, in the demo) and your goal is to have your covert ops unit hack these nodes and reach the extraction zone. Your squad is expendable as they run interference for your largely defenceless covert ops unit, and you may leave as many Exalt forces standing as your personal strategy dictates: all that matters is getting the data out of the fight. 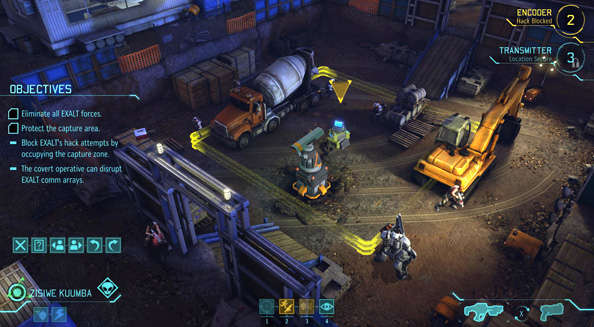 The other kind of Exalt event turns the former kind on its head. In this game mode you’re protecting two nodes, both are visible to you, though one node is jamming the location of the other for the enemy AI. Practically speaking, they’re generally attacking these nodes in order, first heading for the jammer and finally descending on the crucial last node in full force. Standing in the trigger area around a node for three turns will capture it, which effectively turns this into a control point game.

It’s an interesting implementation of a classic multiplayer game mode, given that the nodes are positioned way out in the open with scarce cover available. Keeping snipers on overwatch by the node is an effective tactic, though Exalt units are themselves varied, numerous and unpredictable. They’re all human, though some pack rockets and others rifles, and their AI allows them to work together as a team. Whereas alien units are uniquely identifiable and fairly reliable in their behaviour, any one of the different Exalt units can retreat and heal, or aggressively flank. And they are many, with reinforcements arriving almost constantly. Wave after wave of smartly dressed saboteurs, messing stuff up for the human race. 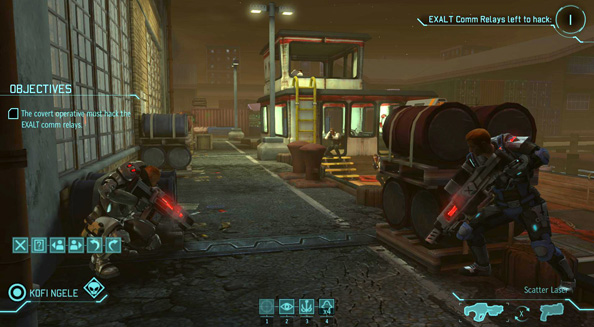 Your covert ops unit is unique too. They have their own set of abilities but are armed only with a pistol and enter battles without body armour. In a sense they’re VIPs with some offensive capability, but their objective almost always runs parallel to that of your main squad. Juggling these two mindsets, a kablammo-kill-everything squad and a sneaky-sneaky-spy person lends some flavour to Exalt scraps.

By knocking down these cells and retrieving data you gradually piece together the location of the Exalt headquarters using Guess Who? style clues. “The host nation does not have a coastline”, “The host nation does not contain the letter U”, and even nods to Firaxis’s other baby with “The host nation is playable in Civilization V”. With enough information you can form an accusation against a nation, though an incorrectly pointed finger will cause such a monumental grump that the wrongly accused country will throw a strop and leave the council completely. So you pick carefully. Once located, you must attack the headquarters much as you would an alien base.

Exalt is sprinkled over the basic campaign, a new nuisance to contend with and an enemy force with which to field test the expansion’s new cybernetic augmentations. Those new augmentations, by the way, allow for incredibly beefy mecha-units and essentially unlock a cast of ridiculous, ethically compromised robo-people. But for my money it’s the titular enemy within, the alien sympathisers within the human ranks, who compose the expansion’s real flair. The ridiculous, ethically compromised robo-people would have nothing interesting to shoot at otherwise.