Let me just get this out of the way: Hard West looks bloody brilliant. It’s XCOM:The Western, with demons. I love a good turn-based, grid-based strategy game, and Hard West looks like it’ll provide enough twists to the formula to stay interesting. Did I mention it has demons?

One thing that makes Hard West stand out is how some missions feature a phase at the start where enemies will ignore your presence unless you do something dodgy (being half demon doesn’t count). If you get the drop on a lone guard before triggering suspicion, you can prevent them from alerting their friends by holding them up. You can also ricochet bullets around corners, which looks like the best thing ever. 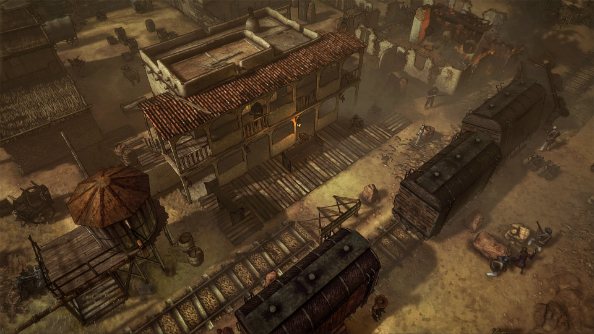 Once combat kicks off, bullets are deadly and bodies drop after one well placed shot – the brilliant sound design makes these shots seem even deadlier. This makes the setup phase even more important, with the positioning of your cowboy/demon hybrids tipping the scales before a gunfight even breaks out.

If a mission drags out demons can arrive, altering the look of the world with their appearance. These require different tactics, as they can soak up more damage and will rush you rather than use cover. Hard West is out this autumn and it is on my radar now I’ve seen it in action in the video below.