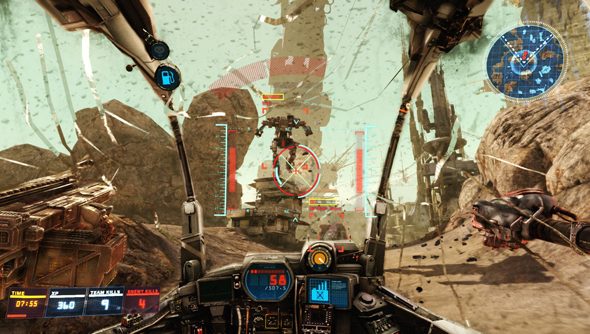 Hawken launched its open beta yesterday, the magical date with all the 12s in it, meaning you can trundle off and download the client right now before jumping into some hot, metallic, robot-on-robot action. The open beta follows a series of short closed betas in which the free-to-play mech sim was panel-beaten into shape, though a glut of features are still yet to come. Producer Jason Hughes describes the launch, as well as his plans for the game’s near future.

Hawken’s currently missing its server browser, as well as clan support and dedicated servers, all of which will be added or re-introduced in a later version. Also due to be revamped is the game’s Siege Mode. The new Siege Mode will “build on some of the core mechanics that we really enjoy about the mode but we will be taking it to something a bit bigger”, according to Hughes.

The Hawken devs have also released extensive patch notes alongside the open beta, which we shall dutifully reproduce below. Hoorah!

Our Alpha and Closed Beta test pilots have helped us immeasurably by playtesting HAWKEN and providing their impressions and suggestions on the official forums. As a direct result of your experiences over the past months, we’re proud to present the HAWKEN Open Beta patch notes.

All players will start with the Assault mech with the following loadout.

Players who purchased the Ensign, Lieutenant, or Commander bundles will receive the exclusive, prototype Vanguard mech with the following loadout.

All Assault and Vanguard mechs come equipped with “rookie” internals which have no negative effects unlike other internals.

Please note that while internal slots unlock at mech levels 8, 10, and 12, rookie internals will affect your gameplay starting at mech level 1. You won’t be able to change out these internals until the slots are unlocked.

Team HAWKEN likes to get this party started right, so each HAWKEN account will start with 15 countermeasure uses pre-stocked!

We are extremely excited about the evolution of this mode, but in the short-term we consider it a work in progress. We’re carefully watching how it’s played and are eager to get your insights on how you feel we can improve it.

Our weapons have undergone balance updates thanks to the community’s great feedback and testing. We all know the weapons are vital to making HAWKEN feel amazing and fun to play. New players won’t notice a difference so this is mainly to inform our more experienced pilots.

Overall, weapons should behave much closer to how they performed in Closed Beta Event 2, with added emphasis on consistent feedback to the player and removing extremely high burst damage.