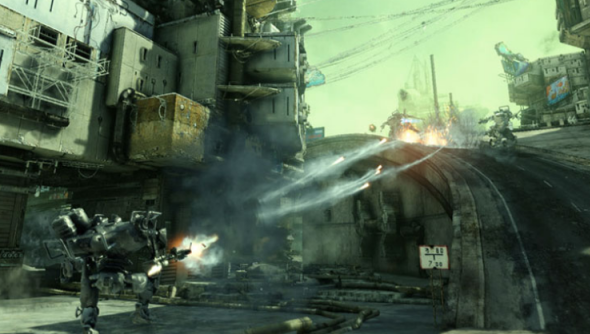 We’ve been calling 2012 the year of the mech for, well, the past year – Mechwarrior Online, Warface, and Natural Selection 2 have all fed into this title – but the game that did most to forge the nomenclature has been Hawken. As I write this there are less than two hours until the free-to-play mech shooter is open for all to play, to tide you over till then check out this launch trailer.

Paul and I’ve been playing in the closed beta and will be bringing you our impressions of itshortly(fingers crossed, tomorrow).

Though you can absorb less flowery-ly written prose by gazing upon these patch notes for the open beta update:

All players will start with the Assault mech with the following loadout.

Players who purchased the Ensign, Lieutenant, or Commander bundles will receive the exclusive, prototype Vanguard mech with the following loadout.

All Assault and Vanguard mechs come equipped with “rookie” internals which have no negative effects unlike other internals.

Please note that while internal slots unlock at mech levels 8, 10, and 12, rookie internals will affect your gameplay starting at mech level 1. You won’t be able to change out these internals until the slots are unlocked.

Team HAWKEN likes to get this party started right, so each HAWKEN account will start with 15 countermeasure uses pre-stocked!

We are extremely excited about the evolution of this mode, but in the short-term we consider it a work in progress. We’re carefully watching how it’s played and are eager to get your insights on how you feel we can improve it.

Our weapons have undergone balance updates thanks to the community’s great feedback and testing. We all know the weapons are vital to making HAWKEN feel amazing and fun to play. New players won’t notice a difference so this is mainly to inform our more experienced pilots.

Overall, weapons should behave much closer to how they performed in Closed Beta Event 2, with added emphasis on consistent feedback to the player and removing extremely high burst damage.