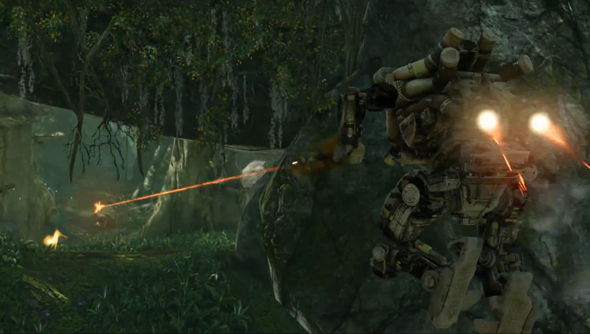 Hawken’s new mech, the predator, could cause real problems for the futuristic robots. At least Arnie was able to hide from the Predator’s heat vision by covering himself in cold mud, 15 foot machines with poor limb articulation don’t really have that option.

As well as the new mech, patch 0.9.6 also adds a new game mode: Co-op Bot Destruction. You and four other players have to fight through 25 waves of AI bots before facing off a big boss.

There’s a metric-poo-tonne of fixes and balances, too.

In this video, Adhesive break down the key features brought in with the new patch:

Full patch notes are as follows:

Before the outbreak of the Hawken Virus, Crion had been experimenting with a dangerous new form of artificial intelligence. However, before this new AI could be completed, Crion was destroyed by the Hawken Virus and all traces of the AI were assumed eradicated.

However, disturbing rumors have arisen that this AI was not destroyed, and has in fact become self aware. The latest reports seem to suggest that the intelligence has taken control of one of Crion’s hidden mech production facilities and begun producing an army of its own. To combat this new threat, Prosk and Sentium have formed special task forces with the sole objective of eliminating the AI before it overwhelms the battered human population of Illal.

Offline Bot Training is a single-player version of Co-Op Bot Destruction that can be accessed from the TRAINING menu. In this mode, you fight alongside AI companions to defeat up to 10 waves of rogue AI bots. No XP or HC is earned offline, but it’s a great place to practice.

The Predator’s Patrick model was originally created to be a successor to the Infiltrator’s Boot chassis. Building upon the core systems of the Infiltrator, its engineers found that with the additional load-bearing capabilities of the Class-B frame, they were able to vastly improve the technologies required for full-frame camouflage. These advanced stealth capabilities, coupled with state-of-the-art infra-red visor modifications, have led the Predator to become a favorite amongst pilots for high-profile recon and ambush missions.

“Those Sentium big-wigs tell us we’re expendable assets, and then reprimand us whenever we waste one of their expensive vehicles. What they can’t seem to understand is that Prosk has some new technologies that we’ve just never encountered before. Every time we go out there on a reconnaissance mission, it’s like the whole jungle is alive, crawling with those scumbags.”

Developers Note: This is a start to how we want to address and balance the repairing ability of the Technician. By splitting into two values, it allows us to make it effective but at the same time make it easier to overcome the repairing by brute forcing it and out damaging the repairs. This will create more interesting play choices. Stay to fight and risk being nuked down, or take cover and get repaired faster. The current values are what we think feel good right now but it doesn’t mean additional balance changes won’t be necessary.

Developers Note: We like the ability and how useful it is. However, it sometime gets out of hand trying to kill one of these mechs. You pretty much need to brute force it to overcome the regeneration rate. By making two states of regeneration, we can balance the ability a bit better. It also creates a bit of strategy when using it. Do I fight and risk getting nuked down or retreat to try to build armor back faster? This in turn, creates strategy on how to play against it as well.

Developers Note:We really like the Bruiser’s ability, but it felt too linear in its old implementation. To make the ability more interesting, we heavily reduced the duration of the ability, but significantly increased the damage reduction during that time. This way, the ability becomes something used to mitigate a short burst of damage, rather than mitigating tons of damage over a long period of time. Now, the user will need to be more strategic in deciding the best time to use it.

Developers Note: This change makes the ability much more interesting and versatile. Players will be able to stay in the mode much longer if they do not boost. They can infiltrate from much farther away and then boost once they get close to the target. With cooldowns much shorter and tied to a resource, it creates more interesting choices in how to use the ability. It also gives a nice incentive to put tuning points into the Fuel Tank tuning system.