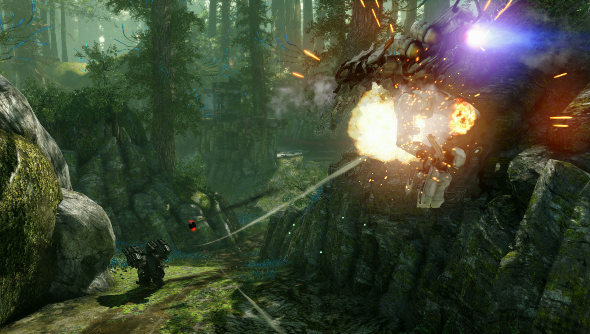 Take one look at Hawken’s Last Eco map and you know that the team at Adhesive Games had a great time with it. After all the game’s exclusively urban, manga-inspired city scapes, Last Eco is a forest-based map, offering a whole host of new challenges for both the design team and players. For players, there’s no longer the sharp angles and choke-point streets to rely on for tactical advantage. For the designers, creating Last Eco was a small headache.

“Unreal Engine 3 isn’t optimised for a high volume of foliage” explained Adhesive CEO Khang Le. “We just had to be clever and work around the limitations of the technology.” A quick run around Last Eco though, and you’d believe Unreal 3 was made for the sole purpose of making forest areas.

When sitting down to design a new level for Hawken, the Adhesive team knew they wanted to depart from their previous inspirations of Blade Runner and Ghost in the Shell. “Map diversity is very important to us, not only to give our audience a variety of experiences, but also to allow our artists to express their creativity. It’s boring to build the same theme over and over again” said Khang. For Last Eco, he looked to a game as far removed as possible from Hawken: Shadow of the Colossus. “I was very fond of the forest area in the game. It had tall trees with an expansive canopy above that blocked out the sun,” said Khang. Despite the restrictions put in place by the Unreal Engine, the team found a way to make their vision work. “We treated the giant trees as buildings. It looks like a forest but it was built very similarly to a city map.”

Lead Designer Tyler Buser knew that making Last Eco a reality would be a challenge from the very start. “With less rigid structures and limitations on height and edges, it was obvious from the beginning that Last Eco would require a different strategy. What I found to work best in the organic layout was lots of large, vertical changes in the forest floor. It allows players to use the edge of a particular hill to take cover, circumvent their enemy, or run away in a much different way than previous levels.” 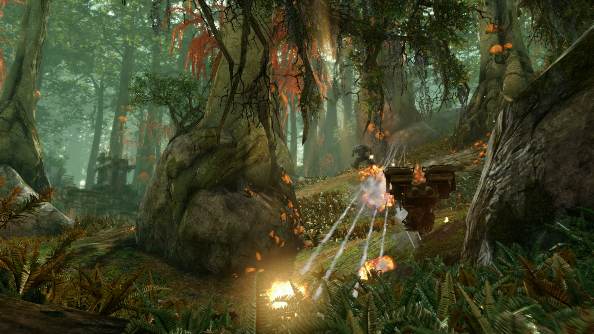 Creating Last Eco wasn’t just as aesthetic challenge though; as with every multiplayer map the area has to be designed with player interaction in mind. Buser emphasises that player choice is key when making a successful map: “[It’s] about making prominently meaningful choices. When players are given dozens of choices, the meaningfulness of each one is diminished. A flat open landscape has infinite choices but players will feel like they don’t have any at all. It’s important to make each one meaningful, either by time commitment or by exposing players to possible danger.”

Buser offered the new pyramid structure in Last Eco as an example of good design. “It’s open and simple, where two players can be on opposing slopes and have complete cover until one of them forces the engagement and crosses the apex, creating a kind of imaginary tug-of-war.”

The crossing of that apex is an important player choice, since breaking cover could bring victory just as easily as defeat. “If players die because of their choices, they won’t feel cheated, they won’t feel it was unfair, and they will try again” Buser claims. With that in mind, you can start to see how every little element, not only in Last Eco but all of Hawken’s maps, is designed to offer the player a simple for consequential choice.

To thunder your way through Last Eco now, you’ll need to strap yourself into one of Hawken’s mechs. Of course that’s dead easy to do, simply download the client and sign up at the Hawken website.