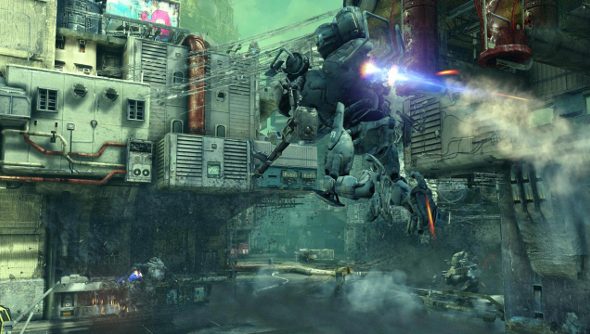 Today sees the free-to-play mech-smashing Hawken begin its transition onto Steam. It won’t appear in the Steam Store straight away, but existing players have been sent out a Steam code which allows them to play early.

From now on, every Hawken pilot will need a Steam account to play, and publisher Meteor Games recommends players uninstall the previous version before they dive into this new steamy future.

Hawken has been in beta since forever, or more specifically since 2012, and I consistently forget – while launching rockets into gigantic mechs or flying over buildings, leaving devastation in my wake – that it hasn’t officially launched yet.

Its appearance on Steam will mark the game’s final leg on its journey towards release. Playing on the US servers in the middle of the night in the UK usually nets me a consistent string of matches, but beyond peak time and on other servers, it’s hard to get a match going, let alone a good one. It’s hard to maintain anticipation in betas this long, but the move to Steam should provide pilots with a lot more mechs to blow up, and hopefully more lively servers in Europe and Asia.

If you’ve not played for a year or so, it’s definitely a great time to dive back in. The September update, Ascension, made large, sweeping changes to the game, most notably in the way you progress through mech and pilot levels, unlocking new equipment over time and fine-tuning your steel-clad brute, eventually gaining access to newer mechs and a more diverse loadout.

If you want to know what changes the move brings, plaster your eyes on this FAQ.