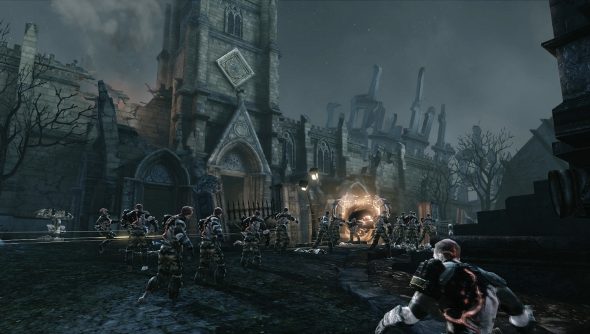 Zombies Monsters Robots (known as Hazard Ops in Europe), the nutty free-to-play shooter from Infernum and Yingpei Games, has blown up the walls of open beta with C4 and has now escaped.

That also means more shooting, more modes and big mechs, because Zombies Monsters Robots launches with a meaty update to get things started.

First off, there’s the War of the Machines update, which was teased earlier this month. It’s all giant mechs punching giant mechs in a steel and rocket-filled PvP mode. These metal juggernauts are customisable and, of course, have jetpacks.

And another new mode has been thrown into the mix: Turret Defence. Zombies are trying to get into the player base, because they’ve heard on the grapevine that there are lots of lovely brains to snack on hidden inside. So it’s up to the mercs to defend their base with big, shooty defenses, namely turrets.

Critical positions have to be protected, and turrets cost resources, so mercs must strike a balance between being a bit thrifty, but not cheap.