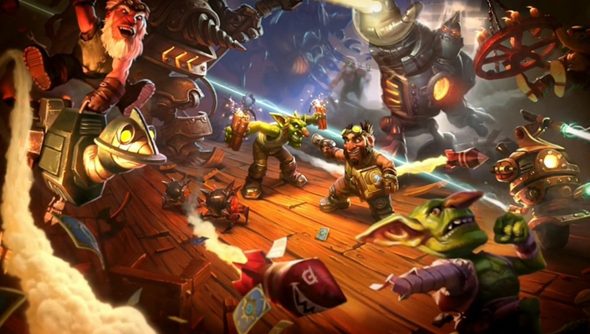 Mine any decently-sized Hearthstone comment thread for long enough and you’ll hit a complaint about its randomness. Chance is woven into the push and pull of the game, and that’s only going to become more true once the cards in Hearthstone’s Goblins vs Gnomes expansion hit.

Blizzard are wary of putting their card game in an early grave marked ‘RNG’ – but they also think an element of randomness is crucial for surprising and challenging long-term players.

Speaking to PCGamesN at BlizzCon this weekend, Hearthstone producer Yong Woo emphasised that the Goblins vs Gnomes cards shown at the event weren’t necessarily representative of the expansion’s direction. But he did say that the game’s dev team “personally find random effects to be very exciting”.

“We really think randomness is part of what makes Hearthstone fun and interesting,” he said.

Woo pointed to a match overseen by fellow Hearthstone designer Ben Brode during the game’s ‘fireside’ BlizzCon panel – in which a pro had to play “at his very best” to avoid death every single turn.

“What’s interesting there is, yes, the outcome is statistically-based, but what [the player] is doing his entire game is basically edging the chance maximally in his favour,” explained Woo. “That final moment, when he had a three-to-one chance to survive and win – he only got there because he demonstrated exceptional skill and strategical knowledge.”

In fact, Blizzard believe that RNG “actually increases the level of skill required to master the game”.

“Because making strategic decisions in situations with a lot of uncertainty, it’s not easy,” said Woo. “There’s no guarantee that if I do A, B, C every time then X, Y, Z is going to happen and I’m going to win.

“What [RNG] does is force you to problem solve in circumstances that you never thought you’d be in. It becomes an interesting, novel decision to have to make. And I think it gives high-level players a tremendous amount of space to differentiate themselves in their level of thinking and skill.”

Some of the new cards to come in Goblins vs Gnomes will provide players with more chances to steer randomness to their advantage. New mech cards with the ‘pilot’ effect will parachute in another minion upon death – and while the strength of that new creature is predetermined, its particulars are not.

By way of example, Woo referenced one of his own BlizzCon matches, in which a downed mech card yielded a mana wraith – increasing the cost of all other minions by one.

“The gears of my head are turning, trying to figure out what happened and what I need to do,” recalled Woo. “How do I turn this situation into an advantage and not a disadvantage?

“To us that’s really exciting. It really flexes the player’s skill. At the same time, it’s creating really exciting fun stories that you can tell your friends.”

Has that been your own experience with Hearthstone? Or did you find yourself frustrated by its dalliances with chance?