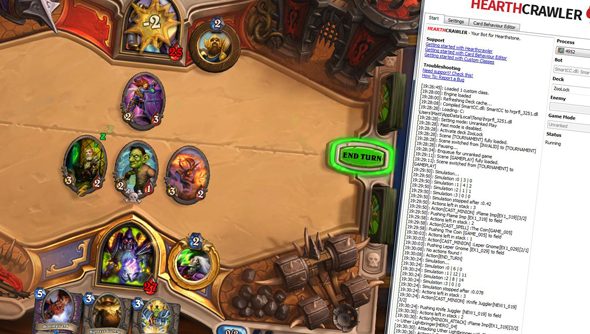 Blizzard’s cheating problem has come to a head lately. Hearthstone win trading has become so prevalent among its top players as to threaten the legitimacy of pro-level tournaments, and we saw several thousand botting accounts banned from the CCG last week.

The developers’ crackdown on automated progression continues with the throttling of the game’s most popular botting program – Hearthcrawler.

The tool’s creators contacted Blizzard after last week’s wave of account bans hit Hearthcrawler users. Evidently, Blizzard have indicated that the program isn’t within the acceptable bounds of third-party apps, and that botters can expect similar treatment in future.

As such the creators have closed down the Hearthcrawler website, which now displays a goodbye message.

“Dear Community,” they write. “This is our last official announcement. It’s clear we have to take off our services/products now. Please note that we’re not going to be commenting further on this.

“Thank you all for being part of our community. We are very sad about this but you also know botting is against the rules and we all knew that the day when our products doesn’t work anymore would come. With tears in our eyes we have to say bye.

“In love, the whole team of Crawlerbots.”

Yep – there’s so much writing on these walls that the place is starting to resemble Rapture.

Making or using third-party programs that automate play is forbidden in Hearthstone’s Terms of Use – and accounts can be permanently suspended for pushing the point.

“A fun, fair, and competitive environment is at the very heart of the Hearthstone experience,” said Blizzard’s Daxxarri last week. “This is a reminder that we take fair play very seriously.”

Does it matter to you that other players are cheating their way up the ranks?