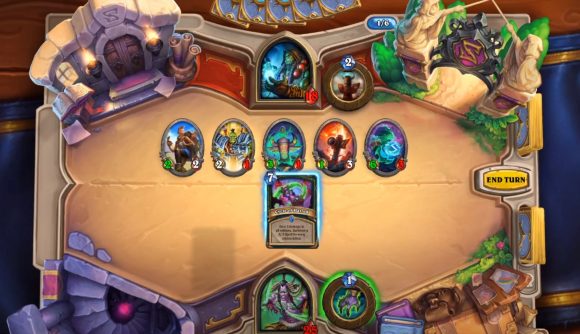 Ahead of the release of the upcoming Hearthstone Scholomance Academy expansion, which is due to bring 135 new cards to the card game’s roster, we’ve got a shiny new card to share with you for the very first time. It’s ominously titled Cycle of Hatred, and it’s sure to pack a bit of a punch when it lands in-game.

As revealed by developer Blizzard, the brand-new Cycle of Hatred spell card has a reasonably high mana cost of seven, and its text reads: “Deal 3 damage to all minions. Summon a 3/3 Spirit for every minion killed”. It’s a Demon Hunter class card and is well suited to playing against token decks, as well as those that rely on smaller enemies. And, it’s worth noting, the “every minion killed” part also means yours are included – so you might have to make peace with a couple of sacrifices to get it to really work for you, but it’s also got good potential for a board-clear in your favour.

As for that three-attack, three-defence spirit you’ll be able to muster, they’re not massive minions, but they could stack up very quickly. Those 3/3 stats mean that at the very least these minions are annoying to your opponent but at best they’re an overwhelming force, so Cycle of Hatred will likely make a solid addition to your hand.

Take a look at the new Hearthstone Cycle of Hatred card below: 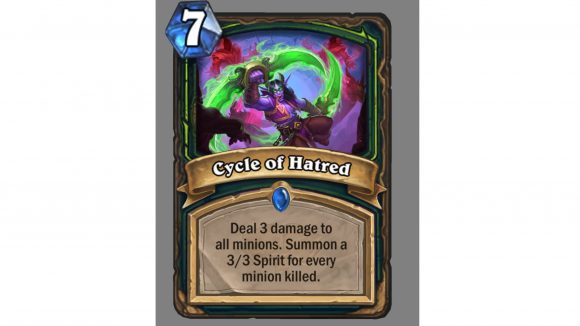 If you’re keen to know more about what’s in store for the coming content, take a look at our Hearthstone Scholomance gameplay preview in which our very own Richard Scott-Jones takes a look at how the expansion channels Harry Potter.