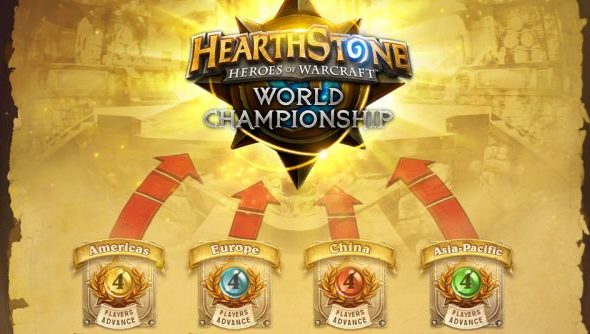 Just ahead of the first major event of the season at Dreamhack this weekend, Blizzard have posted the rules and plans for the next year of Hearthstone competitive play. There’s details on how tournaments must be structured, what will qualify for what, the timescale of the year and most importantly how the points system will work.

Time to shuffle up something more powerful? Here’s the best Hearthstone legendaries.

You can read the full thing over on the official blog, but one fact jumped out at me immediately: the rewards for playing standard ranked play in-game. Coming first on the ladder in a given month will grant 15 points – this is as much as winning the largest non-championship tournaments. That’s huge for opening up the playfield to those unable or unwilling to travel to large tournaments. Beyond the unfortunately located, it’s far friendlier to the time- or money-poor.

Of course, coming first in a ladder of tens of millions, even when it’s split between the four regions of China, Asia-Pacific, Americas and Europe, is no easy task. Plus, nobody’s going to be giving you thousands of dollars for grinding out ranked games. You do still receive points for coming lower, and anyone who reaches Legend rank will get a single point – that’s technically possible with a sub-50% winrate. Those with the most points at the end of the various seasons will receive invites to the preliminary rounds of the Championship with big money, pride and ever more points on the line.

This isn’t going to have a huge impact on my personal chances of making it big as a Hearthstone professional, but provides a more obvious direct climb to the top and removes the barrier to entry of needing to go outside the game and find tournaments to qualify. It enhances ‘the dream’ of being able to slowly get better and better until you’re a world champion and should increase the competitiveness of ladder across the board – it’s great for the game.

There’s lots more in the official post, including details on the extra money being put into the scene by Blizzard and how the program has expanded, as well as the official tournament rules for the next few months and the fact they may change during the season. Which of you will we see on the stage at Blizzcon the Hearthstone World Championships, for which a date, time and place or hosting event have not yet been confirmed,next year?

{"schema":{"page":{"content":{"headline":"Coming first on the Hearthstone ladder is now as valuable as winning a major tournament – in points","type":"news","category":"hearthstone-heroes-of-warcraft"},"user":{"loginstatus":false},"game":{"publisher":"Blizzard Entertainment","genre":"Free to Play","title":"Hearthstone","genres":["Free to Play"]}}}}