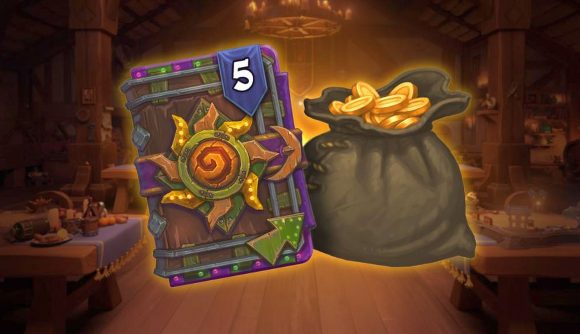 If you’re a fan of card games and free goodies – I mean, who isn’t? – you might be delighted to discover that Hearthstone developer Blizzard is giving away some free goodies you can scoop up right now. The free PC game’s latest patch has just dropped, and, if you hop in for a game following its launch, you can grab five card packs and a chunk of in-game change, just for logging in.

In a dev blog post introducing the new Hearthstone patch 19.2 notes, the studio announces: “As a thank you for being part of our community, we’re also rewarding all players with five Madness at the Darkmoon Faire card packs and 500 gold just for logging in after the 19.2 patch has been released!” Sweet.

These packs tie into the CCG’s most recent expansion, Madness at the Darkmoon Faire, which launched in mid-November, bringing 135 new collectable cards to Hearthstone (one of which – Stiltstepper – we revealed on this delightfully orange site right here).

As for the 500 gold, that’ll get you a couple runs through the Arena mode or Heroic Duels entries, with those two features costing 150 gold apiece, or another handful of five packs, which cost 100 gold each.

Receive 500 Gold and 5 Darkmoon Faire Card Packs when you first log in on the new update!

Thank you all for being a part of this amazing community! 🧡 pic.twitter.com/vjIjPqifQF

The patch is now live, so if you’re a Hearthstone player, you can scoop up the freebies right now. It’s worth noting though that, naturally, you’ll only be able to grab them once per account, and you’ll need to make sure you claim them before January 18, 2021 as that’s when the offer ends.

If you do claim the goodies and are wondering what to spend your gold on, take a look at our sister site The Loadout’s rundown of the best Hearthstone decks for some handy tips on cards and climbing the ranked ladder.