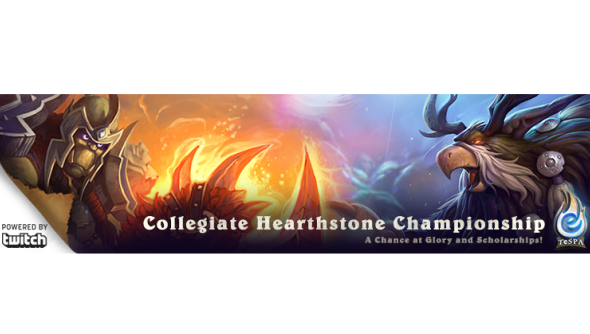 TeSPA have announced their next collegiate project and they’ve switched from Heroes of the Storm to Hearthstone. After the interesting but not necessarily successful Heroes of the Dorm tournament, the Collegiate Hearthstone Championship has similar aims to fund education for those with a talent for Blizzard’s digi-card battler. They’re using a new team format to allow three-person squads to compete for $100,000 worth of scholarships throughout the US.

The event was announced via the official Hearthstone sitewith a trailer to explain what the deal is.

You can sign up now, if you meet the requirements of currently attending a North American college and having a couple of mates who want to play too. Matches will be done in the conquest format, which is the official Hearthstone competitive mode. It involves picking three decks and having to win at least one game with each over the course of a best of five. You win a game, you can no longer use that deck and must pick another. You lose, you can still switch but you’ll have to win with that failing deck once before the end. Confused? There’s a video for that too.

After spending twenty minutes thinking about it, it’s actually a much better system than the more immediately logical lose-and-you’re-out. It doesn’t let you depend on one strategy to 3-0 your opponent and forces diversity into the metagame without relying on a banning system beyond only allowing one deck of each type.

More info on exactly how the tournament works over on the official site.