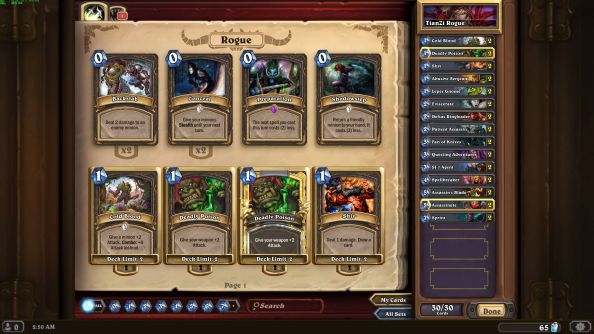 Hearthstone deck-building, for me, has been about realising that two cards might make a cool combo, burying them in bunch of unrelated minions and spells, and then deleting the thing when it turns out the flow of cards to my hand is all wrong. Evidently the community is more inventive and patient than I, however, because they’ve been clamouring for more deck slots for months.

While we’re on the subject, here are the best Hearthstone decks for beginners.

Blizzard have been promising them for months, too, leading to grumblings of discontent and doubt – only compounded yesterday when a community manager said that extra deck slots were “definitely not requested by the majority of Hearthstone players”. But then, hours later, senior game designer Ben Brode sought to keep hope alive.

Don’t believe everything you read! More deck slots are being actively worked on. 🙂

Blizzard community manager Aratil had written on the Hearthstone Reddit that deck slots are “definitely not requested by the majority of Hearthstone players… crazy but true”. He was quick to add that the fact “does not mean that we don’t care”, but an unimpressed community downvoted him into oblivion.

Back in July, Brode said similar – that only 33% of Hearthstone players owned nine decks, the current limit. The dev team were worried then that allowing 18 or 30 slots would lead to confusion and forgetfulness.

“Regardless, it’s something we’re working towards,” he tweeted at the time.

The upset, surely, is rooted in the fact that extra slots appear to be a simple enough change – from the outside at least. Is an extra deck slot or nine something you’d make use of?