Hearthstone’s League of Explorers adventure is now live in the Americas and should be rolling out to the EU and other regions soon. We’ve got some impressions of the new cards, mechanics and one of the first levels right here for you, as well as some other information that came out of Blizzcon. We’ll also be bringing you a full guide to each wing as they’re released, with tutorials on how best to beat them and decklists for doing so.

Here’s all the new Hearthstone cards coming out of League of Explorers.

At Blizzcon, game designer Ben Brode was having a great time showing off all the cards on stage, strutting about in an Indy-style fedora while telling the four-wing story of the League. The mission Blizzard were most eager to show off was the temple escape, a newly-designed type of encounter that cannot be traditionally beaten and features in the first wing released today. It has no health bar or deck, simply a counter that ticks down every turn, with pre-determined effects triggering each time that aim to deplete your life total before the timer hits zero.

Everything has the same theme to it as Ben’s hat – a rolling boulder will be added to your board at one moment that destroys the minion directly to its left every turn. A few turns later the ceiling will collapse, removing the boulder and everything else on the battlefield from play via crushy, stony death. Every so often you’ll come across a decision point as you and Reno Jackson (intrepid explorer, fighter, lover or idiot, depending on who you ask) attempt escape. The first is a choice to either draw an extra card or gain a mana crystal, a decision that will always give benefits but must be customised to the exact deck and battlefield in front of you. Another was a two-evils situation where you either took five guaranteed damage or randomly determined between 10 and 0.

During my hands-on I found these mechanics to be a little formulaic – I’d seen a trailer and others running through it before my first play, so it became clear that both the temple’s actions and my own choices were operating on turn-based triggers rather than the pseudo-randomness I would prefer. I’m not one to often call for more random chance in Hearthstone, but Adventures that so break the status quo of the game are clearly the place for it. As with last week’s Tavern Brawl and Mechazod’s various abilities, this randomness can be controlled so as to never seem unfair, but always provide a new experience. 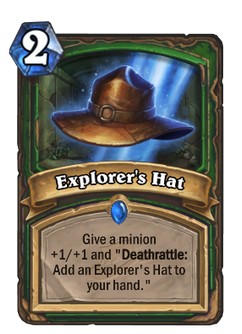 As for the card design direction League of Explorers is pointing in, I couldn’t be happier. That theme of choice that differs each time you make it is echo’d throughout with the new keyword, Discover. It allows you to pick one of three randomly chosen effects to occur, taken from a pool determined by a rider. So, for example, a card may say “Discover a spell” and grab three random spells of your class, or the same with two cost minions, and allow you to choose one to put into your hand. It gets weirder, with one of League’s legendary minions, Sir Finley Mrrgglton, the Murloc gentleman, being a 1-mana 1/3 that gives you three basic hero powers to choose from.

It is, to my mind, the most right Hearthstone has gotten its various dabblings with random chance so far. While the exact possible impact is going to be different each time, it adds decision points throughout the game that will often prove vital. Most importantly, these cannot be mastered via simple rote memorisation – the combination of differing board states and randomly selected cards, never mind class and deck choices, means each will need to be considered individually for unique situations.

Discover maintains all that competitive integrity while still allowing for the kind of moments where Lorewalker Cho pops out of a Piloted Shredder and completely turns a game on its head. Best of all, it means this is only going to happen when you believe it’s of benefit to you, letting these rarely-used cards lead new, effective lives. It will take some weeks, and possibly more cards released using the mechanic, before we know which ones are worth it and which are not, but I’m very happy to see the Hearthstone team pulling back on and more intelligently using RNG after The Grand Tournament’s Joust. 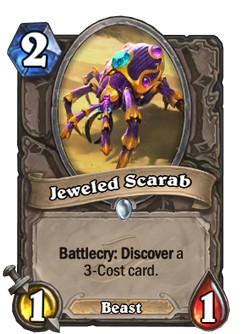 Nick will pop up tomorrow to tell you the best way to adventure with the League through the first wing, then return every Friday until they’re all defeated. Once it’s all wrapped up, we’ll bring you final judgementon whether it’s worth your time, gold and effort, as well as how the various cards are doing in the metagame. Will we see the death of Mysterious Challenger? One can only hope. Let us know what you think of the first wing (or Blizzard’s non-global rollout policy) below.