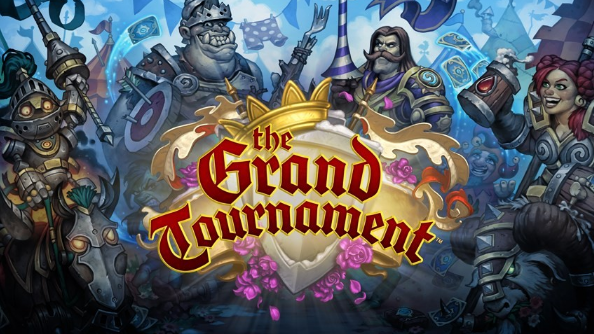 Update: The Grand Tournament is now live! That means you can open packs of the new expansion, craft the cards with dust, pick them in Arena and put them in your constructed decks. Assuming, of course, that you can log in, which is proving quite a challenge for large swathes of the playerbase right now as the servers are drowned in eager would-be duelists. I’m rather enjoying the mental image of Hearthstone’s tavern slowly burning to the ground as a distraction from the wait.

Original story:The day you’ve been waiting for is here at last: the barriers are being raised on Blizzard’s new Hearthstone expansion. The Grand Tournament is finally here today, which means you can go absolutely ballistic with all that gold you’ve got saved up and buy hundreds of new card packs.

Just make sure you don’t make that Goblins vs Gnomes streamer mistake ofspending all your money on vanilla card packs by mistake.

The Grand Tournament adds 132 new cards to the game, featuring a collection of Azeroth’s finest knights and champions. The tournament-theme also comes with a few new mechanics: the new Joust, and the ability to rally minions to victory with Inspire.

The expansion can be pre-ordered for £34.99, which will bag you 50 card packs instead of the usual 50, and a special card back. You’ve got mere hours left until the expansion launches though, so if you want to take advantage of the offer get in there now. You can, of course, still just buy the basic Grand Tournament card packs, which will cost the same as regular card packs.