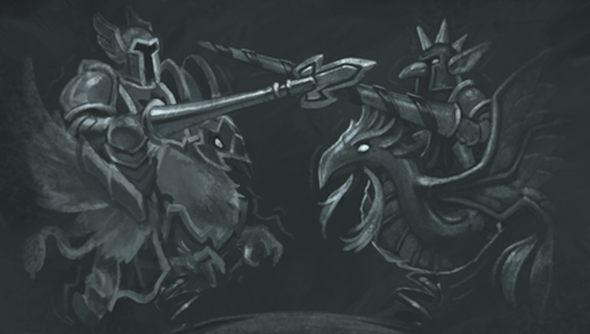 Grab your decks and get your shufflin’ hands ready, it’s the moment all Hearthstone players have been waiting for. The first mass hands-on with cards from the oh-so-close-now Grand Tournament expansion will be this very week. Tavern Brawl, the play mode that changes every week, will play host to a bout between a pair of pre-made decks, Hunter and Mage, packed full of new cards. As per usual, you’ll get a free pack for the first win in this mode and it will go live on Wednesday.

More excitingly, we’ll finally be able to play with the various cards that have been teased over the last few weeks. No exact decklists have been revealed, but the announcement post makes mention of the Mage deck featuring a large number of cards with the Inspire mechanic. This is the one that gives you an additional effect every time you use your hero power, so expect some of the Mage-specific cards that buff that power to show up as well.

Meanwhile the Hunter deck is focused on Joust, where creatures are revealed from both decks and if you win, you get a bonus to a creature or spell that’s just been played. These can range from power and toughness boosts to gaining new abilities or drawing the card that was revealed, as is the case for one powerful-looking hunter card.

The two decks will also not be using the standard hero portraits, instead letting all players play as Medievh and Alleria freely for the first time. Normally it’s £7 a pop to have these avatars, who come with no mechanical benefits but do have unique quotes, animations and card backs.

If you can’t wait until Wednesday, here’s the stream archive from last week of game designer Ben Brode and community all-star Frodan testing out a few decks and showing off some cards:

Chances are this heralds the end of the wait for The Grand Tournament proper, too. After this preview week, it’s highly likely the cards will be launched into the wild during next week’s downtime on the 26th. This will allow them to be played in constructed decks, as well as them showing up as possible picks in the Arena drafting mode. You’ve still got time to pre-purchase 50 packs at a specially discounted £34.99, available in the client.