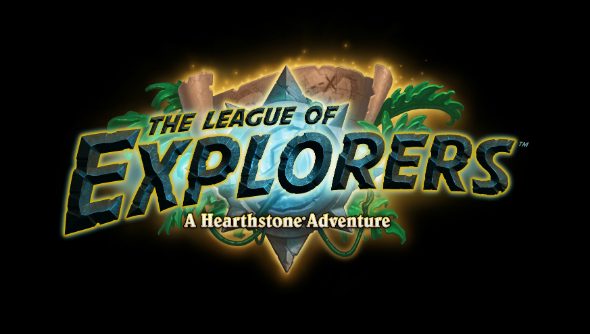 Ben Brode pulled some sleight of hand worthy of his tomb-plundering idols on the BlizzCon stage as he slipped the next Hearthstone adventure into our wishlist for next week. Originally stating it would be out by the end of the year, to much applause, he then revised that time frame to be next Thursday, and those aren’t the only surprises the single-player expansion will have in store as 45 cards join the collection.

There’s still time to put together a killer deck before the new cards arrive, here’s a guide to some of the best starters.

The League of Explorers will feature a familiar format to fans of Blackrock Mountain and the Curse of Naxxramus expansions, defeating wings of enemies in order to obtain cards. However, something the Hearthstone team has been working on as long ago as 2012 is the new battle types that you’ll find in some of the wings. After following a member of the League of Explorers into ruins in search of parts of a mystical staff, occasionally a scenario will appear not out of place from an Indiana Jones film (clearly dear to the team’s hearts, given the theme of the adventure and previously released legendary whip-wielding minions).

These moments, like a crumbling temple escape, or a minecart ride, which would be massive setpiece action scenes in movies will play out a little differently to other boss battles in the game. Instead of trying to defeat a single, high health opponent, you will need to survive enough turns to get out while the game throws bizarre cards at you. From the looks of things, it appears like a Choose Your Own Adventure book mixed with a card game, as choices come up that give you health or mana for deciding which path to take on the minecart track or in the temple ruins.

Your reward for making it through these trials are the cards, of which there are 45 and a new keyword, “discover”. The discover mechanic reveals three specified cards from your class, or neutral cards,and you choose whichever you want. Whether its spell cards, or (3) cost cards, there are a number of new ways to look for the card you need. The most bizarre use of this new mechanic is on the card of one of the adventurers, who you receive after completing their associated wings.

Sir Finley Mrrgglton is, obviously, a Murloc. His Battlecry is “Discover a new hero power” which offers you 3 of the 9 hero powers and you choose one to replace your current hero power. Why anyone would do this is baffling, but no doubt there will be six pro-tier decks ruining the ladder by the end of the month. Murlocs get a lot of love in League of the Explorers, with two cards in particular. Everyfin is Awesome is a 7-cost card that gives all of your Murlocs +2/+2, and costs 1 mana less for each Murloc on the field. To also help out Paladin Murloc decks that run out of steam after sending seemingly hundreds of fishy lizard friends to the slaughter, Anyfin Can Happen is a 10-cost spell which will re-summon 7 Murlocs that have died this game. Oh good.

Other decks getting some attention are Rogue, with a considerable number of minions including Tomb Pillager, whose deathrattle puts The Coin in your hand for some mana help in late game. The reason Rogue has such a large number of minions in this drop of cards, Brode says, is to try to push the class to a different place, and create some new decks out of the League’s cards. 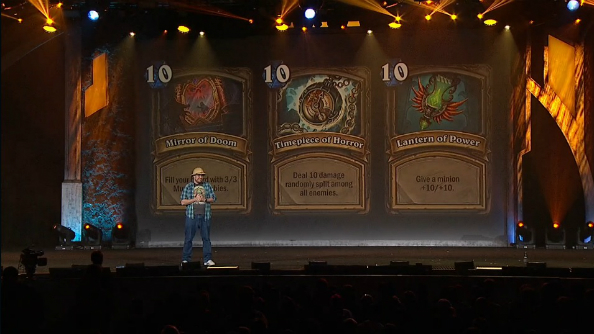 The adventure continues over four wings, the last of which Brode went into no detail on so as not to spoil the surprise, however he did show the cards you can receive from it. All cards will be on HearthPwn within the next 30 seconds or so, but two are of particular importance given how utterly mad they seem.

The first is Elise Starseeker, the adventurer companion for the final wing, whose cryptic description reads “Shuffle the ‘Map to the Golden Monkey’ into your deck”. This sets of a logic chain, as The Map’s description then shuffles the Golden Monkey into your deck. If you can manage to top deck all of these cards, then whatever remains of your hand and your deck will be turned into Legendaries upon playing the Golden Monkey. If anyone ever hits this holy grail of a strat, Hearthstone will have peaked.

The second card is that of the shady main protagonist of the final wing, Arch-Thief Rafaam. His battlecry to discover a powerful artifact will give players the choice of the same three artifacts every time. But as a 9-cost minion himself and each artifact a 10-cost on its own, these are the cream of the powerful crop. Mirror of Doom fills your board with 3/3 zombies, Timepiece of Horror deals 10 damage split between enemies and Lantern of Power gives a minion +10/+10. RIP meta.