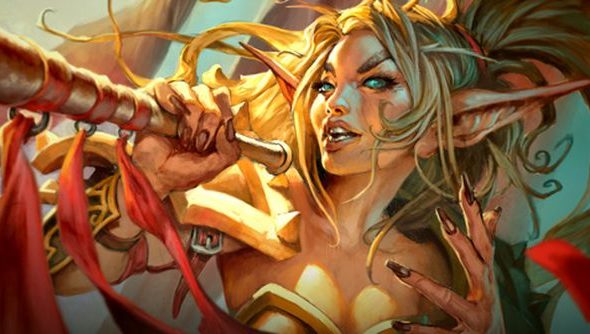 In easily the least surprising news to come out this year, Hearthstone’s latest knights ‘n’ horses (horses may also be: frogs, skeletons, other knights) themed expansion, The Grand Tournament, has a release date of this Monday. Two decks packed with cards from the expansion are also playable in this week’s Tavern Brawl, where a controlish Hunter faces off against a Mage focusing on the new Inspire mechanic based around hero powers.

My one brawl, playing the Hunter, went roughly as expected, where all my joust cards were terrible but I still won because I focused on killing my opponent instead of trying to play the control game. Joust – which reveals a minion from either deck and if you have the highest you get a bonus – is far too random to be useful except against specifically very aggressive decks and none of the bonuses seem powerful enough to be worth it. Early opinions from a fairly average player, of course, but in line with what I expected having looked over the set.

I’ll be slamming a few more games of the mode though, as I like the idea of inspire and think it could be very powerful. It certainly has more two-card-combo potential than joust, which is what much of Hearthstone’s best decks are built around. Plus: new cards! I love new cards. And there’s no Patron Warrior in Tavern Brawl. No need to get in anywhere, everyone.

Meanwhile the full release is set for Monday in both the Americas and here, probably meaning it will go live at exactly 4pm. At that time you’ll be able to open any pre-ordered TGT packs, the cards will start popping up in Arena and you’ll be able to put them into your constructed decks. Then we’ll find out what’s broken, what’s not and someone will hit Legend with a card you hadn’t even realised existed. Here’s the trailer, in case you’ve been living in a Holestone the last few weeks:

Fraser rounded up all the latest bits of non-TGT info earlier today.