Hearthstone’s game director Ben Lee has talked about Hearthstone being a platform for other card games. The newest mode, Mercenaries, brings the total number of modes up to eight, but the latest addition is quite unlike anything we’ve seen in Hearthstone before.

A strategic RPG that focuses on individual heroes rather than a deck of cards, Mercenaries ditches Hearthstone’s ten established classes in favour of three roles: Fighters (green), casters (blue), and protectors (red). You’ll still find iconic characters like Garrosh Hellscream and Valeera, but they’re no longer championing their individual class identities. Fighters like Sylvanas prioritise dealing damage, whereas protectors such as Thrall act as tanks or supports. Rounding off the trio are casters like Jaina and Gul’dan, whose role straddles the line between dishing out spell damage, and healing allies.

Once you’ve figured out what sort of team you want to run, there are abilities and equipment to consider, missions to unlock, and even buildings to construct. If you’re suddenly feeling lost in this flurry of fresh mechanics, then I’m sorry to report that things won’t get any clearer as you play. Mercenaries is easily Hearthstone’s most ambitious mode, but it’s also the platform’s most successful departure from the card game that was released seven years ago.

Here’s how matches work. Players assemble their party of six unique mercenaries from Warcraft lore to fight against AI and human opponents – imagine something like Pokémon’s turn-based monster battles. Generally, fights are 3v3 contests, though this can vary depending on the AI opponent, with the remaining three mercenaries entering the fray whenever one of your party members is injured.

To succeed in Mercenaries, you need to set your party up so that it’s got the right mix of offense and defence, with a sensible range of counters to boot. You wouldn’t try to take on the water gym leader with a party of fire types in Pokémon, and the same goes for Mercenaries. You’ll want at least one mercenary for each role, but you can be creative in how you choose to stack your squad. Aggro builds contain more fighters, whereas more defensive setups will rely on protectors to battle through the rounds. 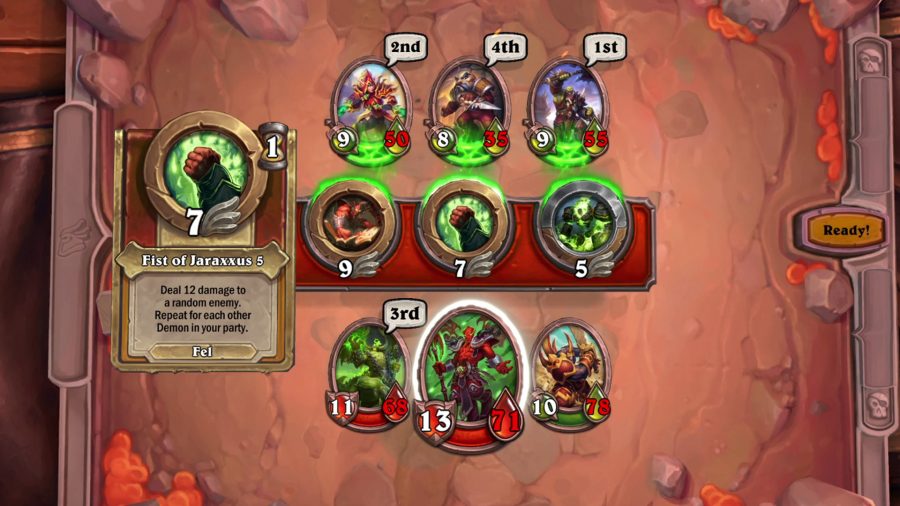 While I’m not a fan of Battlegrounds – which put an autobattler spin on familiar Hearthstone characters and cards – I can muddle through to complete my weekly quests without having to invest much time learning the intricacies of the mode. Existing modes like Duels, Battlegrounds, and Arena all share Hearthstone’s DNA, making them easy to pick up if you’re a seasoned player. Mercenaries, however, feels completely alien to me. It’s packed with its own quests, currency, and subset of modes that feel awkward and out of place within Hearthstone’s framework. Even after playing it for a couple of hours I’m still struggling to understand what it’s trying to be.

The first hour of my preview session consists of early PvE quests with the mode’s starter characters. These early encounters feature very little of the promised strategy and team synergising. You have access to a few abilities, but the missions are so simple that picking the attack with the highest damage is enough to get by.

Mercenaries’ PvE and PvP modes are completely different in terms of strategy and match-ups. PvP is also significantly more exciting than PvE, but it comes with a steep learning curve that only gets more insurmountable when you start dabbling with endgame content. Unsurprisingly, with 51 mercenaries to pick from, each with three unique abilities and a special piece of equipment, this mode features far too much content to get to grips with in just a couple of hours.

Related: Here are the best Hearthstone decks for beginners

Further compounding the confusion, every mercenary can be leveled individually, which floods every bout with variables that are impossible to factor into your strategy. As a result, this is the first game mode that takes both your MMR (matchmaking rating) and your overall progression into consideration when you’re looking for an opponent. “You’re never going to experience a situation where you go up against somebody and you’re like, ‘oh yeah, that person paid $100 and they destroyed me,’” says Lee, “It’s just not going to happen. That’s not how it’s made and it’s not how it’s designed.” 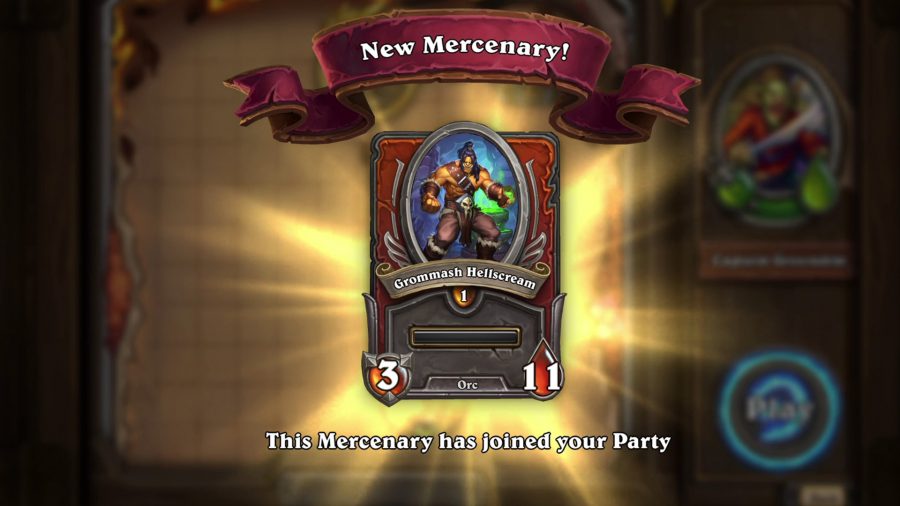 The only issue with this system is that, in most cases, there’s always going to be an imbalance somewhere. With so many variables to keep track of, you’re going to play in matches where one player is at a slight, but tangible disadvantage. Both parties could have mercenaries around the same power level, but the chances of this being equal are very unlikely. Unless you invest a lot of time into Mercenaries to max out your party’s level and abilities, this is always going to be the case.

Mercenaries feels completely alien to me

Players are rewarded with eight characters for completing the prologue and introductory missions, enough to create a varied party that’s capable of tackling every mission in the campaign. It’ll take you around 20 hours to complete the normal campaign, and the team has gone through the game multiple times with the starter party to ensure it’s free-to-play friendly. “I’ve personally completed all of the normal difficulty content in Mercenaries just using the starter team, which is a completely unrealistic experience,” says Lee. There’s also Heroic content to get through which offers 50% more experience, allowing you to level your characters much faster.

You can unlock all 51 mercenaries without ever spending any real money or in-game gold, but you’ll need to play pretty much every day for the next four months to get enough coins from daily bounties. Alternatively, you can stick with a small roster of mercenaries, choosing only to upgrade them by focusing on bounties that reward character-specific Mercenary Coins. Fortunately, bounties are procedurally generated so you won’t have to run through the same content every time you want to farm coins.

Fans of constructed Hearthstone and Battlegrounds don’t need to worry about Mercenaries overshadowing their favourite modes. There are teams working on every major game mode, along with separate release schedules. The Mercenaries team already has big plans for the future and promise regular content drops over the next year. “We’ve really put a huge amount of effort into the PvE and making sure that we can sustain that long-term,” Lee says. “It’s easy for us to increase the level cap, for example, to allow more progression. Right now the level cap is at level 30, maybe in a year from now it’s level 50.” 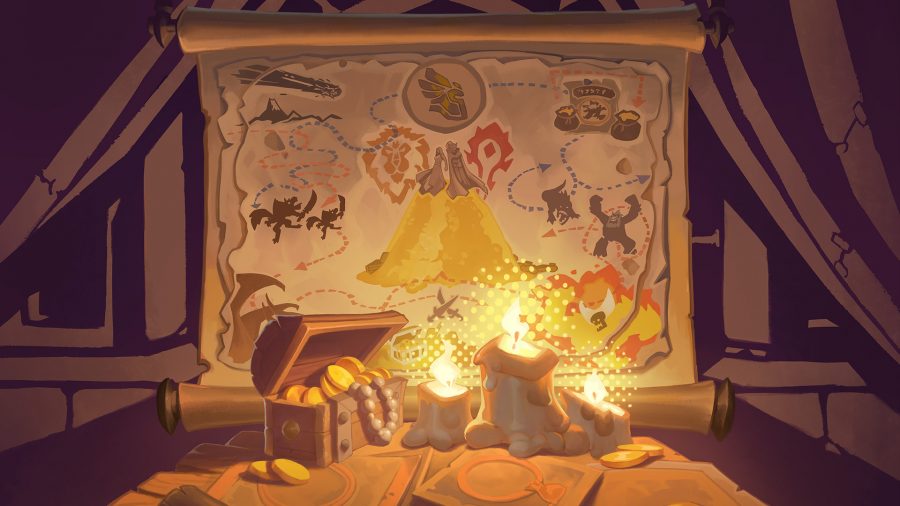 It’s fair to say that the messaging around the new mode hasn’t been great – a lacklustre gameplay showcase in August followed by months of silence. But I’ve been holding out some hope that getting hands-on with the mode might reveal its promise. Now that its launch has finally arrived, and I’ve spent a few hours with the mode, I’m still not convinced.

As someone who mainly focuses on constructed play, the thought of having to sink lots of time – and, let’s face it, money – into a new mode just isn’t appealing, particularly when it’s this complex and overwhelming. This new game mode might not be for existing players like me, but the JRPG elements could be enough to introduce a different audience to the Hearthstone platform, so perhaps this is a play for the future of Blizzard’s CCG.